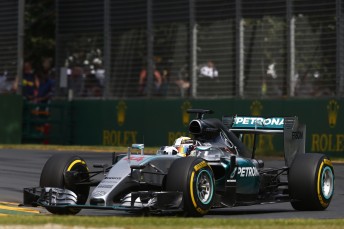 Lewis Hamilton produced a blistering performance to secure pole position for the Australian Grand Prix by more than half a second from Mercedes team-mate Nico Rosberg.

Hamilton dominated the opening qualifying session of the season as the reigning world champion posted the fastest time of the entire weekend with a 1:26.327s effort.

Rosberg made a mistake late in Q3 which hampered his pole hopes but he ensured Mercedes locked out the front row despite being 0.594s adrift of his team-mate.

Felipe Massa confirmed Williams’ impressive pace in third just a fraction ahead of the Ferrari’s of Sebastian Vettel and Kimi Raikkonen.

Daniel Ricciardo managed to put the drivability issues of his Red Bull behind him to grab seventh behind the Williams of Valtteri Bottas.

Toro Rosso rookie Carlos Sainz Jnr will start from eighth as he continued his impressive showing on his F1 debut.

The Lotus’ of Romain Grosjean and Pastor Maldonado completed the top 10.

Sauber’s Felipe Nasr will start from 11th spot having come perilously close to securing a place in the top 10 shootout.

Fellow Rookie Max Verstappen could only manage a time good enough for 12th, while Red Bull’s Daniil Kvyat continued to struggle and will start Sunday’s race from 13th position.

The Force India’s of Nico Hulkenberg and Sergio Perez were unable to unlock the pace of the VJM08, leaving the pair 14th and 15th on the grid.

The McLarens struggled for outright speed with Jenson Button and Kevin Magnussen scheduled to start from 16th and 17th positions respectively.

Neither of the Manor F1 entries of Roberto Merhi and Will Stevens ventured out in qualifying.

The British team has encountered software issues all weekend which has prevented them from any on track running.