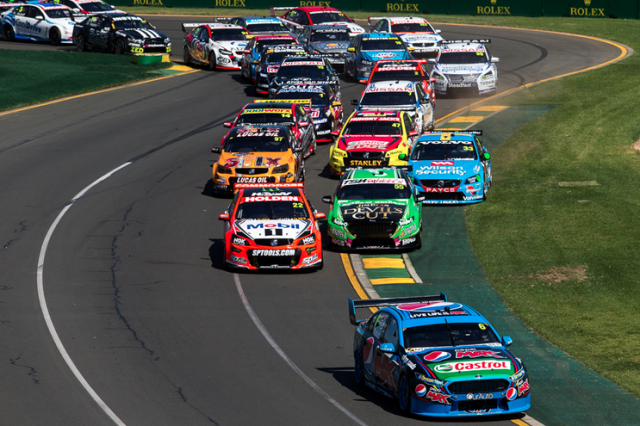 A multi-car accident on the opening laps brought the Safety Car out for three circuits, before Winterbottom controlled the restart and the remainder of the 12 lap affair.

The result marked Winterbottom’s first victory since June last year, where he triumphed at Hidden Valley. Shane van Gisbergen overtook David Reynolds for fourth shortly after the restart, with minor contact at Turn 6 shuffling the Ford down the order, eventually finishing 19th.

The single Safety Car had been required on the opening lap to retrieve the stranded Mercedes of Ash Walsh.

Walsh had been involved in a multi-car fracas on the run to Turn 6 that also saw the cars of Marcos Ambrose and Tim Blanchard spinning down the road.

Blanchard drove his crumpled Holden back to its garage while Ambrose continued at the back of the field, sporting cosmetic damage on the way to 23rd.

Also down the order was Scott McLaughlin, who finished 17th after dropping back to last when he was shuffled wide at Turn 3 on the opening lap.

The second of four V8 Supercars races will get underway at 1820 local time, with the grid set on the result of Race 1.