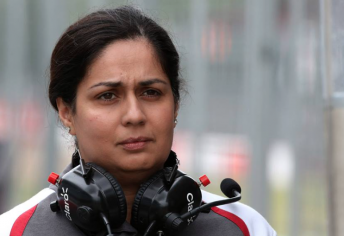 The Victorian Supreme Court will decide today if Sauber boss Monisha Kaltenborn will face prison for a contempt of court charge as the Giedo van der Garde case continues.

The case resumed this morning with the Dutchman’s lawyers requesting Kaltenborn to be punished and for bailiffs to seize the Swiss team’s cars and equipment ahead of the season opening Australian Grand Prix.

The request from van der Garde’s lawyer came after he told the court this morning that Sauber had failed to comply with this week’s ruling, declaring the team must reinstate the former Caterham F1 racer as one of its drivers.

Van der Garde successfully won a dispute where he claimed Sauber reneged on a contract to drive for the team this season, leaving one of its two contracted drivers Felipe Nasr and Marcus Ericsson in limbo.

Mr Peters, representing van der Garde, argued that Sauber has continued to block the Dutchman’s request for a superlicence required to compete at Albert Park this weekend.

However, it is understood the FIA is not in a position to issue a superlicence with regulations stipulating a request must be lodged 14 days prior to an event.

The driver requiring the license must also be nominated by the team for which he will be competing.

Meanwhile, van der Garde was given access to the F1 paddock this morning by Sauber.

He was photographed wearing Marcus Ericsson’s race suit ahead of Practice 1, with reports suggesting he underwent a seat fitting.

Ericsson and Nasr prepared to take part in the opening free practice session of the season but neither cars ventured out on track.

The case was due to continue at 3.15pm but the court has since notified that there will be a further adjournment.

“You are summoned to attend before the Court on the hearing of an application by the Applicants for the following declarations and orders:

1. A declaration that Sauber Motorsport AG is guilty of contempt of Court as particularised in the accompanying Statement of Charge, for failure to comply with paragraph 2 of the Order of the Honourable Justice Croft made on 11 March 2015 (the 11 March Order).

2. That Monisha Kaltenborn-Narang be punished for the contempt committed by Sauber Motorsport AG, by committal to prison for a period to be determined by Court or, in the alternative, by a fine of an amount to be fixed by the Court.

3. That Stewart Alexander McCallum, Peter Damien McCluskey, James Henry Stewart and Brendan John Richards (the Sequestrators) be appointed as sequestrators of all the real and personal estate of Sauber Motorsport AG situated in the State of Victoria.

4. An order that each of the Sequestrators, or any two or more of them, are authorised and

(a) enter upon and take possession of the real and personal estate of Sauber Motorsport AG; and

(b) collect, receive and get into their hands the rents and profits of the real and personal estate of Sauber Motorsport AG; and

(c) keep them under sequestration in their hands until Sauber Motorsport AG complies with the Order of the Honourable Justice Croft made on 11 March 2015 or until further order.

6. The costs of this application be paid by Sauber Motorsport AG on an indemnity basis.”