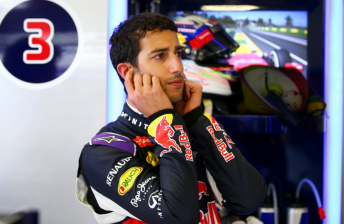 Daniel Ricciardo in the Red Bull garage at Albert Park

Daniel Ricciardo has been left to analyse data from team-mate Daniil Kvyat’s car after managing just nine laps on the opening day of practice at Albert Park.

The Australian’s Red Bull-Renault suffered issues with the internal combustion element of its powertrain during the first of the day’s two 90 minute sessions.

Ending the run 10th fastest, the team elected to change the engine, which meant Ricciardo was rendered a spectator for the entire afternoon’s running.

The team is yet to confirm whether it can salvage the engine taken out of Ricciardo’s car, which is one of just four allowed for the driver this season.

Team-mate Kvyat completed 18 laps to be 11th in the first session before logging a further 27 laps on the way to sixth fastest in Practice 2.

The Russian’s time was a full 2.3s adrift of the dominant Mercedes package, while also proving slower than the two Ferraris and Valtteri Bottas’ Williams. Ricciardo will rely on data from team-mate Kvyat, who managed 27 laps in Practice 2

“I had a feeling from pretty early on today that we were probably going to struggle a bit,” reflected Ricciardo this evening at Albert Park.

“I’ll try and look to what he (Kvyat) did in FP2 and understand a bit of a direction to take tomorrow (FP3).

“Obviously I did a few laps this morning,” he added.

“The track was pretty rubbered in already compared to last year so I should be able to get up to speed quickly tomorrow.”

The day had been a frustration for the Perth-raised Ricciardo after a big pre-event build-up.

“I’ve got to get these ants out of my pants now; I’m hanging out to drive,” he said.

“It’s been a bit of a tease all week, talking about driving, and now I just want to get out there.”

A final 60 minute practice session will be held on Saturday afternoon ahead of qualifying.