A 1:56.05s effort saw Winterbottom move a scant 0.03s clear of Mostert with just 90 seconds of the 30 minute session remaining.

The result was an emphatic way for Ford to end its V8 Supercars pole drought, which stretched back to November, 2013.

The Holden Racing Team’s James Courtney proved the best of the rest in third, a full 0.3s adrift of pole.

Prodrive’s strong day, which had seen their cars top both practice sessions, was completed with a fourth place qualifying performance from David Reynolds. 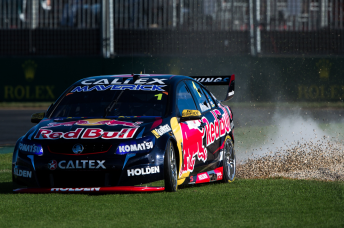 Whincup starts ninth after this mistake on his final tyre set

“The team has done an incredible job, it’s been an awesome day,” said Winterbottom.

“We’ve topped every session between us and I’ve got the right one which is nice because I haven’t had a pole for such a long time.

“The car is really good. We always thought we had a good car on high speed tracks, but Adelaide proved a bit of a challenge in terms of a lower speed layout.

“But if we can improve where we’re already good and tinker away at the slow speed ones we should be in for a good year.

“You’ve got to enjoy the results when you get them and I’m just rapt to get a pole position again.”

Whincup sat just 17th as the chequered flag flew after running off at Turn 1 on the first lap with his final set of tyres.

The Red Bull star rescued ninth with a second lap to end up four places clear of team-mate Craig Lowndes.

“I hit the brakes and she locked up, so I’ll put my hand up for that one,” rued Whincup.

“It’s not really the place I wanted to start, but that’s life and we’ll see if we can pick a few off in the race.”

Todd Kelly was meanwhile just 0.04s ahead of brother Rick in the battle for top Nissan honours.

Stable-mate Michael Caruso’s horror day with his new car continued as the #23 Altima again failed to complete a flying lap due to electrical issues, despite a pre-session engine change.

“We’ll figure it out tonight but we haven’t gotten to the bottom of it yet,” said Nissan Motorsport’s Scott Sinclair of the issue. “It’s one of those pesky electrical dramas that no one can see.”