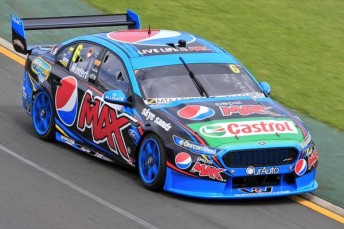 Chaz Mostert bounced back from his Clipsal 500 woes to record the fastest time in the opening V8 Supercars session of the weekend at Albert Park.

The Prodrive Ford driver traded the top spot with stable-mate David Reynolds for much of the 30 minute hit-out.

Mostert eventually recorded the two quickest times of the session, with his best of 1:58.78s coming after the chequered flag.

“The guys have done a fantastic job to straighten the car out,” said Mostert, who endured a heavy accident on the final lap of the Sunday race in Adelaide less than two weeks ago.

“It’s good to come out and have some pace. It’s only early days and everyone has a mixed bag in terms of tyres but it’s a good start.” 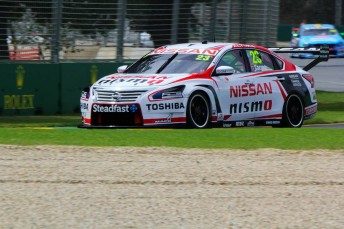 Teams have just two sets of pre-marked tyres for practice, with many of those who endured misfortune in Adelaide benefiting from better rubber.

Scott McLaughlin and Will Davison set late quick times to end up second and third ahead of Mark Winterbottom, Shane van Gisbergen and Reynolds, who had a positive first hit-out in his FG X.

Clipsal 500 winner James Courtney wound up eighth fastest ahead of Todd Kelly and James Moffat in the leading Nissans.

The factory squad endured a difficult opening practice for Michael Caruso’s brand new chassis, which failed to complete a flying lap due to electrical issues.

The team completed the car yesterday, leaving no time for a pre-event shakedown.

Marcos Ambrose, who has this weekend moved back to the chassis he debuted in last year’s Sydney 500, ended up 22nd, ahead only of Volvo substitute driver Chris Pither and rookie Andre Heimgartner.

The second V8 Supercars practice of the weekend will get underway at 1510 local time.