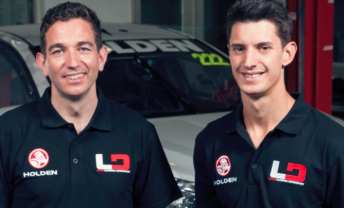 The 42-year-old Brit partnered Percat at Walkinshaw Racing for last year’s enduro campaign, where he emerged as a solid co-driver.

The pairing finished eighth in the standings helped by an impressive third place at the marquee Supercheap Auto Bathurst 1000.

New LDM recruit Percat has been keen to continue the partnership with Gavin admitting he was the only co-driver on his wish list for the enduros.

The Pirtek Enduro Cup season begins with the Wilson Security Sandown 500 from September 11-13.

“Oliver was the first and last driver on my list of who I wanted to drive with,” said Percat.

“I was adamant on having Oli back because he showed great speed, is a quality driver and brings a wealth of international and endurance racing experience.

“He’s a consummate professional and I know that both Lucas Dumbrell Motorsport and I can learn a lot from him. He’ll bring a lot of ideas on how we can continue to develop.

“We can focus on making sure our car is strong from the outset, because I know he can drive a V8 Supercar fast.”

Four-time Le Mans 24 Hour class winner Gavin believes the partnership of youth and experience was key to their success last year and is already looking forward to the enduro campaign.

“Nick and I had a great run at Bathurst and finishing on the podium was definitely a highlight of the year for me,” said Gavin.

“Nick and I are a great combination; we work well together, and are a strong mix of youth and experience, so I’m really looking forward to continuing what we started.”