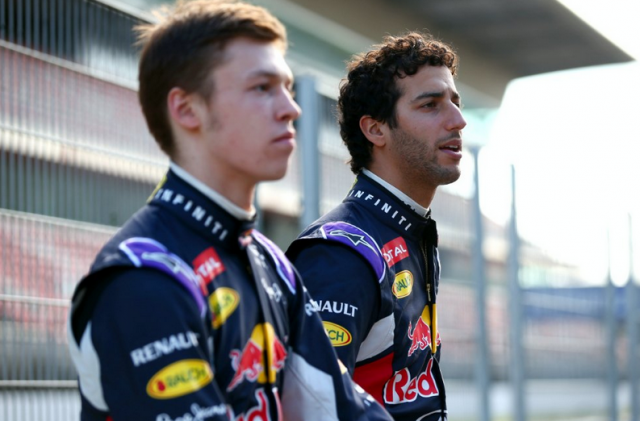 Vettel’s exit, which came with a year of his contract remaining, saw Kvyat rushed into the team after just a single season at Toro Rosso.

Kvyat is the third driver to progress from Toro Rosso to Red Bull Racing following Vettel (2009) and Ricciardo (2014).

The Russian, who has been racing single-seaters since 2010, finished 15th in last year’s championship with five points finishes.

“It was cool last year to have Seb alongside me with his wealth of experience,” said Ricciardo, who surprised many in the F1 paddock by comprehensively out-gunning the German last season.

“I got to understand how Seb worked and learn from his experience and now I’ll learn from Dany’s youth.

“It’s sort of the new generation coming through now. I was part of that and there seems to be an even newer one now.

“These young kids keep getting hungrier and hungrier and obviously I’ve got to watch that. But I think I’ll learn some new things from him definitely.

“I’ll always focus on myself and look to myself first and do what I can do best, but after that you can always lean on your team-mate and learn some new tricks.

“Dany seems pretty unfazed by it all, which is good. It seems like he’s settling in well to a top team. It should be fun.”

Dismissing the notion that he’ll be under more pressure this year to perform, Ricciardo stresses that success will rely on the drivers, the team and engine partner Renault all performing at their best.

Although enjoying a far smoother pre-season than last year’s nightmare, the new Red Bull RB11 has proven a long way from the pace of the latest Mercedes offering in testing.

“At the moment testing has still shown us that Mercedes is really strong,” affirmed Ricciardo.

“I don’t want to be pessimistic at all but they seem to be the team to beat at the moment.

“Behind them it’s really close I think with us, Ferrari and Williams. We all look to be next in line.

“I think if we put it all together we can definitely fight for that last spot on the podium this weekend. We’ll obviously try and apply as much pressure to the Mercs as possible.

“It’s still early days and no one has really been on track at the same time with the same tyre and fuel load and all that yet.

“Until Saturday we’re not really going to know, but I’ll definitely be doing what I can to get as far up the grid as possible.”

CLICK HERE for more with Ricciardo ahead of the 2015 Australian Grand Prix, including his thoughts on F1 safety in the wake of Fernando Alonso’s testing crash.