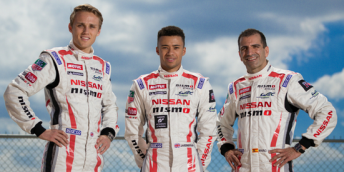 Nissan has confirmed its driver combinations for the ambitious LMP1 project where it will campaign a pair of GT-R LM NISMO machines in the FIA World Endurance Championship.

After previously announcing its roster of drivers, Nissan has assigned Marc Gene, Max Chilton and Jann Mardenborough to its lead #23 GT-R LM.

The #22 front-engined, front-wheel-drive hybrid will be piloted by the experienced Michael Krumm, Harry Tincknell and Olivier Pla.

Nissan will roll out a third GT-R LM for Lucas Ordonez, Alex Buncombe and Tsugio Matsuda for the showpiece Le Mans 24 Hours on June 13.

The Japanese manufacturer encountered problems at what was scheduled as a five-day test at Sebring last week when a component failure put an early end to proceedings after just two days.

It has been reported that the issue involved an engine mount housing the 3-litre twin turbo petrol that works in unison with a kinetic energy recovery system.

An official Prologue test at the Paul Ricard circuit in southern France is scheduled for later this month ahead of the opening WEC round, the Silverstone 6 Hours on April 12.

The Nissans will compete against existing factory entries from Toyota, Audi and Porsche.