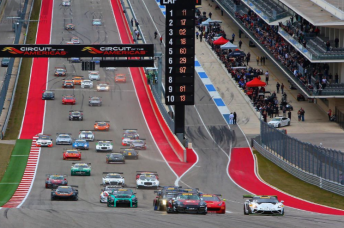 Australian James Davison claimed a top six finish on his Pirelli World Challenge debut at the Circuit of the Americas.

The 28-year-old managed to bring home his AIM Autosport Nissan GT-R in sixth in Race 1 to claim 76 valuable points on his first start in the American GT3 category.

Factory McLaren driver Kevin Estre provided a wet weather driving masterclass as he dominated treacherous conditions to win Race 2 by more than half a minute.

Dalziel completed his strong start to the series with another second place finish ahead of Nick Catsburg’s Lamborghini Gallardo in third.

Set up issues blighted Davison’s hopes of another Top 10 as he finished a distant 16th.

The Pirelli World Challenge heads to St Petersburg for the second round on March 27-29. Loeb on his way to victory

Citroen remain the dominant force in the World Touring Car Championship after Jose Maria Lopez and Sebastien Loeb shared the spoils in the opening round of the season in Argentina.

The French manufacturer completed a clean sweep of the podium places in Race 1 at the Autódromo Termas de Río Hondo circuit.

Reigning world champion Lopez recovered from a slow start which saw him lose the lead initially to team-mate Yvan Muller at Turn 1.

Lopez quickly opened up a comfortable lead which he refused to give up throughout the 13 lap contest.

The Argentinian eventually took the chequered flag from Muller while a third factory Citroen driven by Loeb claimed the final podium spot.

The works Hondas of Tiago Monteiro and Gabriele Tarquini came home in fourth and fifth respectively.

Meanwhile, Loeb scythed his way through the field from eighth on the grid to win Race 2 from Lopez.

Monteiro became the first non Citroen podium finisher of the season in third with Tarquini fourth.

Contact between Mehdi Bennani and Muller saw the latter retire after an excursion off the circuit saw grass collect in the front of his car’s radiator.