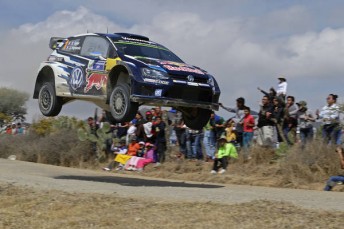 Sébastien Ogier maintained his unbeaten record in the World Rally Championship after easing to a third consecutive victory at Rally Guanajuato Mexico.

Ogier overcame the odds to win the four-day gravel event by 1:18.8s to extend his lead in the drivers’ standings to 34 points after three rounds after fearing an unfavourable starting position would hamper his winning chances.

He headed Andreas Mikkelsen by 6.3s after the Volkswagen driver lost out by spinning on the final day’s opening stage.

Ogier took the lead on Thursday night’s second special stage and was never headed.
Despite opening the roads on Friday and sweeping slippery gravel from the surface, his selection of two soft compound Michelin tyres in unusually cold conditions proved inspirational.

The Volkswagen Polo R driver smashed his rivals in the 44km El Chocolate test to build a lead.

Once Thierry Neuville rolled and Jari-Matti Latvala (VW) retired on Saturday after hitting a bank which destroyed his suspension, Ogier cruised home.

“I think we can be proud, we did an amazing job this weekend,” Ogier said.

“I think it’s one of the best wins of my career. To open the road in Mexico and win is special. A lot of people made mistakes, but we put maximum pressure on them.”

An early spin left Østberg languishing at the bottom of the leaderboard in Citroen’s DS 3.

He recovered quickly and held off Mikkelsen, who insisted he was driving cautiously to gain experience of roads that were mainly new to him.

Elfyn Evans matched his career-best fourth in a Ford Fiesta RS after a clean run.

He was over a minute clear of Dani Sordo, who returned after breaking two ribs in a cycling accident and overcame gearbox problems to drive his Hyundai i20 to fifth.

Neuville recovered to eighth, but slips to third in the championship, with Nicolas Fuchs and Jari Ketomaa completing the top 10.

Tänak’s accident was the most serious, the Estonian and co-driver Raigo Mõlder escaping from their Fiesta RS seconds before it plunged five metres to the bottom of a lake.

Amazingly the car was winched out of the water and went onto finish the rally.

The championship pauses for a seven-week break before Rally Argentina from April 23-26.

CHAMPIONSHIP STANDINGS AFTER THREE OF 13 ROUNDS: