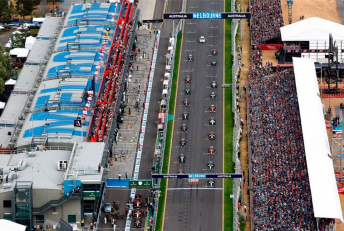 The Australian Grand Prix will see the first of the shared broadcast rights between Fox Sports and Channel 10. Where will you watch F1 in 2015?

Under a joint arrangement struck for the next five years, Fox Sports and Channel 10 will share grand prix coverage starting with the Rolex Australian GP in Melbourne this weekend.

For the first time in Australia, every session including the opening two practice runs on Fridays will be broadcast through the bumper season.

Under the new five-year agreement, Fox Sports will broadcast all 20 events live in HD.

The three practice sessions will be based on the track feed while coverage will begin 60 minutes before qualifying.

On raceday coverage will start 90 minutes ahead of the race with the full suite of commentators, Martin Brundle, Johnny Herbert, Damon Hill and Anthony Davison used in the broadcast.

The aforementioned will be replayed on One HD, Ten’s affiliate, in a one-hour highlighted format at 9.30pm on the Monday following each race.

Channel 10 will cover all other races live including the Australian Grand Prix with a minimum guaranteed coverage of 25 hours over the three days over the next five years.

Mark Webber has been commissioned by Channel 10 to commentate at selected grands prix including Australia for the next two years.

The free-to-air channel will see the celebrated magazine show RPM, broadcast on Sunday afternoons featuring F1 content and significant action from practice and qualifying as well as leading interviews.

The in-studio Channel 10 commentary team will be hosted by Matthew White while Alan Jones will co-host preview and review segments.

What broadcaster will you be tuned into? Have a vote on the poll below.