M-Sport’s extraordinary plight to retrieve and repair Ott Tanak’s Ford Fiesta after it rolled off the road and into a reservoir has been documented in a team timeline of events from Rally Mexico.

Considered one of the great salvage operations in the history of the World Rally Championship, the team was given little chance of getting Tanak back into the competition under the Rally 2 rules.

Against all odds, the team successfully put the Fiesta back together with Tanak eventually classified a finisher, listed as 22nd in a wild rally that saw several topline WRC competitors tumble. 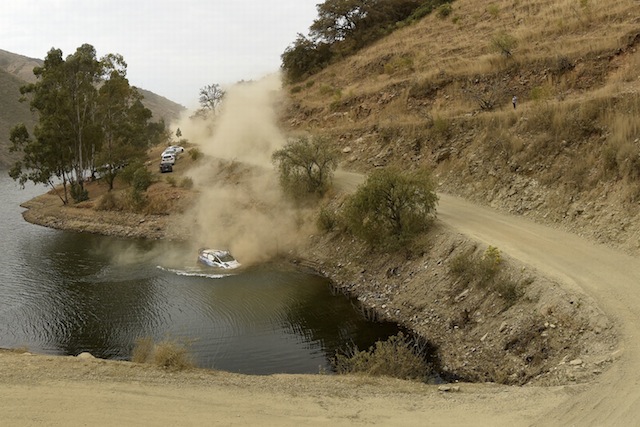 Both driver and co-driver were lucky to escape

09:24 – The number six Ford Fiesta RS WRC left the road 2.6 kilometres into SS3 and became submerged at the bottom of a five metre deep reservoir.

09:30 – When the following car cleared the stage, it became evident that there had been a serious problem and the team contacted all relevant organisations to discover what had happened as quickly as possible.

09:38 – The stage was stopped and the Rapid Intervention Vehicle was sent in, confirming that both driver and co-driver were okay with no serious injuries.

10:17 – The crew arrived back at the service park having been flown in by helicopter. They were then taken back to the hotel and given a full check by the team doctor. Raigo also started the lengthy process of drying his pacenotes, page by page. 12:09 – The crew came back to service to complete media interviews and the team sent the mechanics out to supervise the recovery of the Fiesta.

16:30 – The stage was closed and the recovery vehicles were permitted to enter.

16:45 – The organisers sent the first divers down to locate the car – it was no longer on its wheels.

17:45 – The Fiesta emerged from the watery depths and was pulled up onto the embankment.

18:00 – The car was loaded onto the recovery truck and Raigo Mõlder’s mobile phone was retrieved from the car, still working! 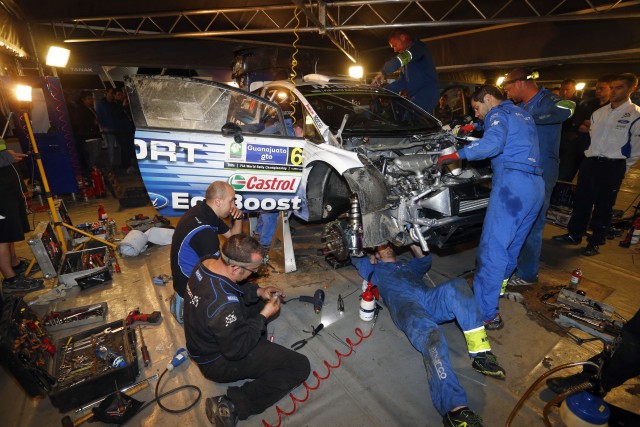 20:15 – The Fiesta returned to the service park and the team immediately started assessing the damage.

22:00 – Work was temporarily halted as regulations only allow one mechanic to work on the fuel system during the service. Following the fuel tank inspection it was decided to replace it.

22:03 – With the workforce back up to full numbers, the tank was removed as well as all of the interior: seats, electronics, radios and dashboard.

22:15 – The technicians started removing the standing water from inside the cockpit.

22:25 – The team produced an expert fix on a damaged engine block, and drained the engine of excess water. Against the odds, M-Sport successfully completed one of the greatest repair jobs in WRC history

22:30 – With two hours to go, they started reassembling the car. Every part which had been taken from the Fiesta RS WRC was replaced as new – everything except the seats, belts, bonnet and toolkit.

23:00 – With one hour to go, the technicians cranked the engine for oil pressure.

00:10 – For the final 20 minutes, the team fitted the bonnet, ran through the gears and even had time to give the car a polish – the number six Fiesta RS WRC leaving service well within time. Tänak and Mõlder delivered the car to parc fermé. The entire job was completed within the maximum three hour time limit.

08:30 – Tänak and Mõlder went to collect the Fiesta RS WRC from parc fermé, only to discover that it kept cutting out – the result of being stood overnight.

08:31 – The team’s quick thinking meant that as soon as the crew had pushed the car out of the holding area, a technician was waiting with a recce car to tow it back to service.

08:32 – The car was pushed into its service bay to the applause of the other manufacturer teams.

08:33 – The technicians adjusted the Fiesta’s geometry, changed the spark plugs, changed the electronic coils (twice) and managed to bring the Fiesta back to life.

08:49 – Tänak drove the car out of service and into refuel. Unfortunately, she came to a halt shortly after the refuel zone.

09:25 – Tänak and Mõlder were able to get the Fiesta up and running again, but the time allocated to get them to the start of the first stage has elapsed.

10:28 – The crew drove the car back to service, where she was left to bathe in the Mexican sun – drying all of the components ready for Rally 2.1.

15:10 – Rally 2.1 began with another three hour deadline. The technicians changed all of the fuel pressure sensors as well as the full engine loom. They also changed the oil and further adjusted the geometry.

16:25 – The engine was restarted and the engine engineer checked the data. Following this, it was decided to change the ECU as a precaution.

17:12 – Following a few start-ups to ensure there were no recurring issues, the number six Fiesta RS WRC was driven into parc fermé – ready to fight another day.

VIDEO: M-Sport crew working on the car after it was at the bottom of the lake