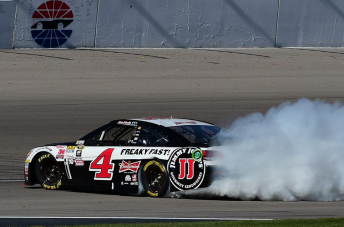 Harvick led 142 of the 267 laps in the Kobalt Tools 400 to win to go with his two second place finishes to start the season.

Despite starting in 18th, he worked his way to the front and proved the class of the field.

In a town where luck is everything, Harvick reported a vibration over the closing laps before taking the chequered flag, his celebration causing a left rear tyre to shred.

Harvick’s hot start to the season has every chance of being extended next weekend at one of his most successful tracks – Phoenix.

“It’s so cool to win here in Las Vegas, and to start this West Coast swing off this way is pretty awesome,” Harvick said.

“Just to be in front of all these fans I’ve raced in front of since about the mid-‘90s… it’s pretty special to win here.”

The victory vaulted Harvick into the lead in the series standings by nine points over Earnhardt, who has finished with a pairs of thirds and a fourth in the first three races of the season.