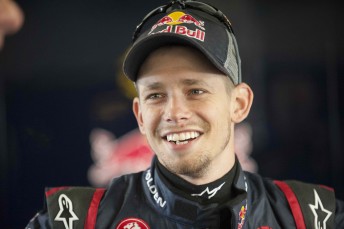 The 29-year-old stepped away from competitive motor racing at the end of 2013 following a brief stint in V8 Supercars’ second tier Dunlop Series with Triple Eight Race Engineering.

His move from two to four wheels came just months after announcing his high profile retirement from MotoGP mid-way through 2012.

Having taken a season out from all forms of competitive racing last year, Stoner, who remains an active test and development rider for Honda’s factory MotoGP squad, is looking at embarking upon a spell in GT racing.

Stoner takes some of his inspiration from double MotoGP champion and factory Yamaha rider Jorge Lorenzo, who made his GT debut at the Gulf 12 Hours last December alongside Australian Liam Talbot.

“I’d love to go and do some GT racing here and there and some lower key endurance races,” Stoner told Speedcafe.com ahead of his return to the Australian motorsport scene with an appearance at Sydney Motorsport Park’s Top Gear Festival on April 18-19.

“I just want to do something enjoyable. I’d like to travel and maybe go to Asia and do a couple of races.

“Now I’ve had my year off last year, this year I will start getting back into things a bit and see what we can set up here and there.

“Later this season I’d like to get myself in a car a bit and get up to speed and hopefully do some smaller races.

“That is the exact kind of thing I want to do,” he continued in reference to Lorenzo’s Gulf 12 Hours debut.

“I’d even like to if I can set up some good fun endurance races, and if we can get a team together, then maybe do it with one of the MotoGP riders.

“But realistically everything I want to do is for enjoyment. Of course I will give it a go and see what we can do but I just want to enjoy being out on the track and enjoy having a bit of a race.”

While GT racing has emerged as Stoner’s next motor racing challenge, he looks back on his solitary Dunlop Series season mostly with frustration, having being unable to showcase his ultimate pace in the short sprint races.

“We did the Dunlop Series but I realistically wanted to have a year off and do a bit of testing throughout the year to see if I’d enjoy it,” added Stoner.

“I had a lot of pressure just to go racing straight away. There were only seven rounds during the year but they had me doing appearances here there and everywhere.

“The whole time I was there it was work. It was a job. I quickly backed out of that because I really needed my year off. It wasn’t as enjoyable as I wanted it to be.

“With short races you can’t really do anything,” he added.

“I didn’t know the tracks or the car and for the race I had pace to be in the top two or three, but I needed longer races to pull myself up through, but unfortunately they just didn’t give them to me.

“It was frustrating more than anything but I loved it, it was a lot of fun and there were a lot of good guys in the paddock.”