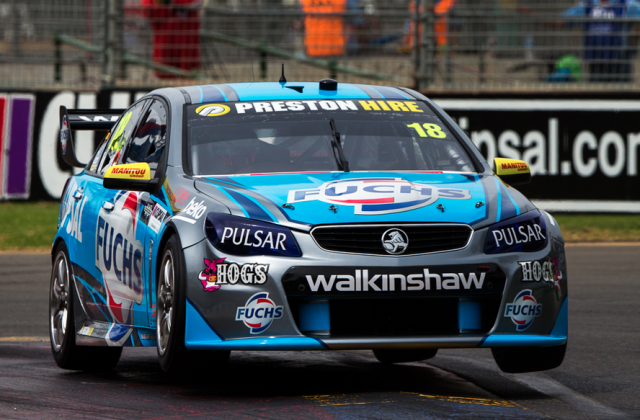 Lee Holdsworth proved among the pace-setters in Adelaide

Lee Holdsworth believes a top five finish in the V8 Supercars Championship is now a realistic target after showing strong speed on debut with Walkinshaw Racing.

The 31-year-old ran in the top 10 for much of the Clipsal 500 weekend, recording ninth and 10th place finishes on Saturday before crashing out on Sunday.

While the Turn 8 incident leaves him just 21st in the championship standings, Holdsworth and license holder Charlie Schwerkolt both left Adelaide highly encouraged by the car’s speed.

The duo made a surprise switch to Walkinshaw over the off-season after the driver initially signed to steer Schwerkolt’s Prodrive Ford.

“The goal was always to finish top 10 in the championship but I think its not unrealistic also to push for the top five because the car is certainly capable of that,” Holdsworth told Speedcafe.com.

“The big goal for me was to finish in the top 10 at Clipsal and I always thought that would be quite realistic, but in practice I had to reassess as I had top five pace.

“At the end of the weekend I was a little disappointed with the results, but the pace exceeded my expectations.

“The last couple of years have pounded me pretty hard,” he added, having finished 20th in the championship in each of the last two seasons with Erebus Motorsport’s Mercedes package.

“We had a lot of bad luck and failures and it was hard to keep getting back up.

“Its a pretty good spot to end up and its really good place to be, I’ve got a huge smile on my face.” 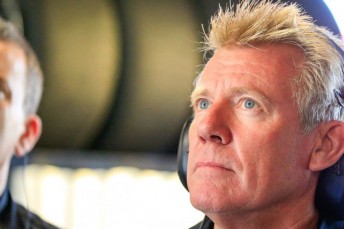 The performance was a significant relief for Schwerkolt, who is still trying to sell primary sponsorship on the #18 Holden for the balance of the season.

Fuchs has taken naming rights for the opening three rounds, after which the sides of the car are currently set to be without backing.

With Dean Fiore and James Rosenberg having handed their Racing Entitlements Contracts back to V8 Supercars in recent years, Schwerkolt is now the only independent V8 Supercars license holder who does not also have equity in a race team.

Schwerkolt’s business model ensures he must cover the team’s services contract with sponsorship dollars and any dividends forthcoming from V8 Supercars or be forced to dip into his own pocket.

“It’s a massive risk, for sure,” said Schwerkolt of starting the season without full funding in place.

“I’ve only got one option, which is to fill the car up (with sponsorship) and I’m very, very confident I can do that.

“It’s tough out there with the economy and all of that sort of stuff, but now I know I’ve got a really good package to sell.

“If we were slow I’d be worried, but I’m not as worried now because it’s a top three to five car I think.”

Schwerkolt admitted he considered parking his license at the end of last year, but has no regrets over his decision to press ahead with the Walkinshaw deal.

“It was on the radar but never what I wanted to do,” he said of handing his REC back.

“I’ve been doing this for a long time now and feel I’ve still got a lot to offer the sport.

“I’m out there to win and it’s been a while since I’ve had a smile on my face. I’m pretty stoked to be moving forward.”

Schwerkolt spent the last two years at Prodrive, finishing 13th with Alex Davison and 23rd with Jack Perkins in 2013 and 2014 respectively.