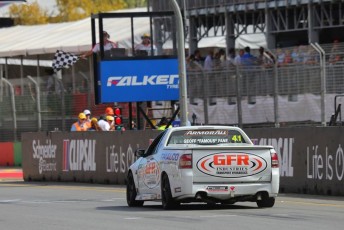 V8 Ute driver Geoff Fane has protested his innocence over involvement in a nasty incident at the Clipsal 500 Adelaide.

Fane was fined $10,000 and excluded from the meeting after making side-to-side contact with Bruce Oaklands at the exit of the final corner, which led to both Utes crashing into the pit wall.

Officials standing behind the wall were lucky to escape injury as the two Utes careened into an access gate in the concrete.

Despite appearing to be at fault, the 50-year-old Fane angrily remonstrated with Oaklands after exiting his Holden.

Understood to be seeking a harsher punishment, CAMS has appealed the penalty set down by its own stewards.

In a lengthy statement provided to Speedcafe.com, Fane has rejected suggestions that the incident was a deliberate act, claiming that the wheels of the two cars had become locked together while he was “moving across to the racing line”.

Fane had been turned around in an incident involving Oaklands the day prior, but added that he was unaware who the other driver was until after the Race 3 crash had occurred.

“The incident that occurred at turn 13 in race 3 was not a deliberate or an intentional move, which ended in both vehicles not finishing the race,” said Fane in a statement.

“It was a racing incident that started with contact from car 7 mid corner, as shown in the in car video and in the data from both cars. 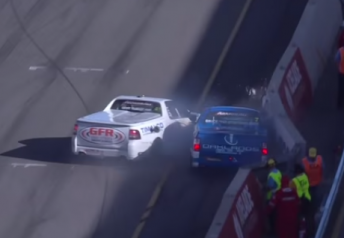 Officials were lucky to escape injury in the accident. pic: V8TV

“The vehicle contact that occurred after was myself defending my race position moving across to the racing line for the next corner and not realising how far car 7 was up my inside.

“After the contact he made on my car at the turn I thought he made a poor run off the corner and didn’t think he would be so far up.

“In the process of moving over I made contact with car 7, our wheels got locked together and I was a passenger until we hit the wall.

“The data from the cars shows that I had lifted off the throttle and applied the brakes as we made contact and that Car 7 kept full throttle hence why it was such a hard hit into the wall and this is documented in the CAMS steward report.

“It is also noted the steering is 25 mm out of alignment and the steering wheel is 40 degrees from centre in car 41 and this is in the cams report.

“My apologies go out to the officials on the pit wall, I never want to see anyone hurt, let alone the volunteers who generously donate their time to allow us to race. I wish them a speedy recovery to any injuries they may have sustained.

“In reference to exiting the vehicle and approaching the other Ute and driver in an aggressive manor, I am deeply apologetic for this and embarrassed about my actions.

“There was no benefit in causing both our cars to be damaged and not finish the race and incur a large damage repair bill. 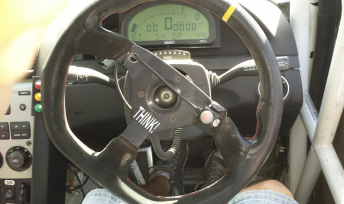 “To read reports that it was deliberate is totally untrue, I didn’t know who the driver was till we came to a stop and at no time have I stated any different.

“I have never ever had one mark against my name in my entire racing career both in Australia and overseas and I am deeply disappointed I no longer have a clean record.

“The comments and threats that have been directed at my sponsors and myself are not fair and very damaging.”

The Brisbane-based businessman has extensive racing experience in both Australia and the United States, where he has competed in a variety of Trans Am and speedway machinery.

CAMS has yet to set a date for its appeal hearing.

VIDEO: Fane (onboard) clashes with Oaklands and Noel Edge in Race 2