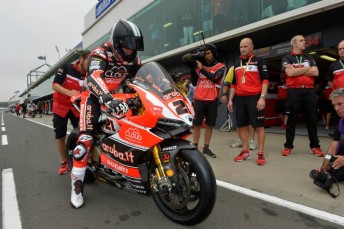 The 45-year-old is again set to substitute for injured Ducati rider Davide Giugliano, who is aiming to return for round five of the championship in May.

Bayliss has confirmed that he will ride at the Chang International Circuit in the Buriram province of Thailand on March 20-22, while the team is yet to decide its plans for the following two rounds.

“I’m really excited to be able to ride the Panigale R again and I thank the Aruba.it Racing – Ducati Superbike Team for the opportunity,” said Bayliss.

“It will be great to work with the team again. Compared to the Phillip Island round, organised pretty much at the last minute, this time I’ve had the chance to train and prepare myself properly.

“I’m really motivated and feeling ready; I can’t wait to get back on track.”

Bayliss, who retired from full-time riding in 2008, made a steady start to his comeback at Phillip Island, finishing 13th and 16th in the two races.