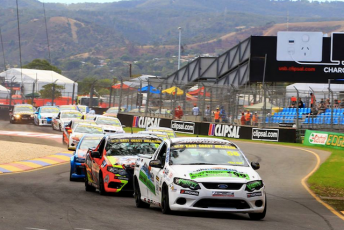 The ownership model of the Australian V8 Utes class remains unchanged amid the strategic alliance with V8 Supercars, according to category manager Craig Denyer.

Under the previously announced agreement, the Utes category will now enjoy a five-year period where it will race on the V8 undercard with a further five-year option to extend.

In the past any contract with V8 Supercars has been on a year-to-year basis.

Denyer dismissed claims that V8 Supercars have moved to purchase the Utes, saying that the board structure remains unchanged.

“The board and the shareholding structure remains exactly as it has been,” Denyer told Speedcafe.com

“The Australian V8 Ute Racing category is still exactly the same structure as it has been for the last 10 years. None of that has changed.

“The category has always essentially been owned by CAMS and we’ve been given a lease to run it basically on their behalf.”

Fundamentally the newly struck alliance gives Utes a stronger platform to launch its new era of SUV-style utilities from next year ahead of the end of local Holden and Ford Ute production.

“We are going to have a five plus five year horizon to keep this platform on the V8 Supercars calendar which we’ve never had in the history of the category,” Denyer said.

“So we can build a long term business platform with that horizon.”

“We also know what the TV package is going to be.

“We think where we’ve ended up is probably going to be the best all round result.

“It guarantees we stay on what we think is the primary platform in Australian motorsport that we need to stay on.

“And it gets us the opportunity to bring in other manufacturers, it gets us the chance to rebrand, refresh, reinvigorate the category after essentially 15 years of what has been the same.”

Denyer sees an opportunity for the fresh alliance to help Utes with the ability to court other manufacturers and ratify other engine configurations.

“I think the ability to bring in other manufacturers and the ability to change engine configurations to include diesels; a lot of expertise has got to be put on the table to make sure we get the balance of performance right,” Denyer explained.

“Australian V8 Ute Racing doesn’t have the financial resources to operate significantly at that level.

“Given the resource base, given that they (V8SC) have gone through it before with other manufacturers and other engine configurations means that we’ve got that major resource that we can essentially lean on.”

The partnership also shores up technical support with Oscar Fiorinotto, the existing control damper supplier and parity manager, while Craig Hasted, who has a long history with V8 Supercars engine development remains a valuable part of the Utes category.

Fiorinotto is designing the new evolution Ute from his Adelaide base with the build of the first prototype targeted for a late August finish.

Meanwhile Denyer has ruled out the possibility in the short-term the alliance will lead to an increase of the existing eight-round Utes calendar.

“Under the category management agreement there is a specific amount of rounds and that is determined by CAMS,” Denyer said.

“We run an eight round series as determined by that CAMS agreement so that automatically can’t go from eight to 10 to 12 whatever without that being formally ratified.”