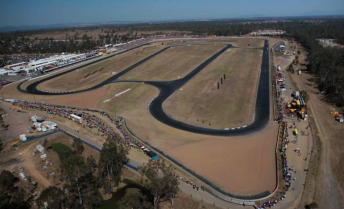 Quinn says buying Queensland Raceway would be a logical move

Tony Quinn may add an Australian racetrack to his business portfolio after a formal bid to buy Taupo Motorsport Park in New Zealand was rejected.

Quinn has made previous overtures to buy Queensland Raceway at Ipswich off John Tetley who possesses a 50-year lease from the state government.

The petfoods and chocolates baron had an offer, believed to be around $4 million, rejected by more than 30 percent of Taupo’s shareholders recently.

“I gave it a look and gave them a price and I said, ‘that’s my best offer’,” Quinn told Speedcafe.com of Taupo.

“I’m out of it now. It’s a shame because I had some great plans not just for Taupo but the whole of motorsport in New Zealand.”

Quinn opened his $20 million showpiece racetrack, Highlands Motorsport Park, at Cromwell in New Zealand’s South Island at Easter, 2013, where he has run the final round of his Australian GT Championship for the past two years.

He had aspirations of setting up headquarters for his Aussie Racing Cars Series at Taupo among other plans, however he has now had to rethink his strategy.

“I think I could have gone a long way to sorting out motorsport in New Zealand,” he said. “You can’t do it without two tracks.”

He has made advances several times to purchase the Hampton Downs circuit in the northern Waikato region but those plans also fell flat.

“After that Taupo became the obvious step to fix motorsport in New Zealand.”

Quinn now remains in the frame to purchase Queensland Raceway if Tetley wants to opt out of his lease arrangement.

“Honestly the best thing for me to do is to buy QR. It makes money,” Quinn said.

“I could spend four or five million to improve the circuit.

“At least motorsport in Australia is solid. You don’t have to embark on fixing something.”