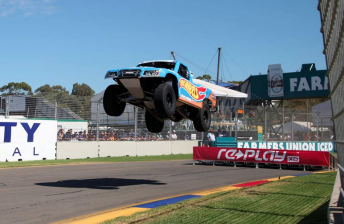 Matt Mingay led the Australian brigade in the Super Trucks

Robby Gordon has moved to offer stuntman Matt Mingay an invitation to race a Stadium Super Truck in America following the Australian’s slick showing at the Clipsal 500.

Mingay, better known for his stunt shows and movie work, turned his hand to his first racing venture in the Super Trucks at the V8 Supercars’ opening round in Adelaide.

Driving one of 10 trucks imported from the United States for the event, Mingay raised eyebrows by finishing the three races with two thirds and a fourth.

In front of packed grandstands the high flying Super Trucks saw crowds enveloped with emotion over the entertaining form of racing which is beginning its third year.

Gordon, the former IndyCar and NASCAR driver who designed, built and runs the Super Trucks from a base in Charlotte, North Carolina, wants Mingay to race in the US.

The Super Trucks have become a phenomenon at street circuits in North America as well as appearances at the Austin X Games and the most recent Race Of Champions event in Barbados.

“If we get the opportunity to go to X Games again – Matty (Mingay) – I’m bringing this guy with me,” Gordon said after the final Super Trucks race in Adelaide, which saw the series owner take the overall honours after a trio of second places.

Mingay was delighted with the experience and overwhelmed to be duelling in the lurching, leaping trucks against the likes of Gordon.

“I’ve been following these boys and I just thought it’s the best type of racing I’ve seen,” Mingay said.

“I’ve just been a stuntman all my life and been a general clown and I think I kind of fit in well.”

Gordon declared the Clipsal layout as one of the finest temporary circuits he has encountered and believes his extreme truck racing series will return to Adelaide next year.

According to Gordon, preliminary discussions about a return visit next year have already begun.

“I’ve enjoyed working with this group. Nathan Cayzer (commercial manager South Australian Motor Sport Board, Clipsal 500)
has been a man of his word all the way through,” said Gordon of returning in 2016.

“Obviously it’s his decision if he wants us back or not. I’d like to come back and I believe we will be back next year.”

Providing the Super Trucks return, Gordon says he would like to see the field bumped from 10 to 12 with an equal share of Americans and Australian drivers.

“I think we should have six American trucks and six Australian trucks and we need to keep it equal,” he said.

Gordon says part of the reason the crowd have overwhelmingly warmed to his entertaining series was that Australians had a natural affinity with offroad vehicles.

“Some places like Australia has an offroad flavour to it and a lot of people like to go offroading,” he said.

“I think we were probably an easier fit than something like a Detroit Grand Prix or something.”

The Super Trucks kept crowds enthralled across the Clipsal weekend with V8 Supercars drivers and team personnel captivated by the action.