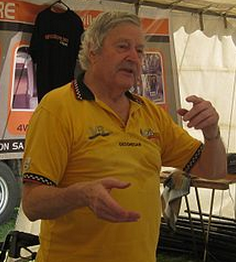 Leo Geoghegan, a household name in Australian motor racing in the 1960’s and 1970’s, has died

Leo Geoghegan, one of the heroes of Australian motor racing during its renaissance era has lost his battle with prostate cancer.

Geoghegan, 78, succumbed to the illness in the Sydney suburb of Leichhardt after his health took a turn for the worse recently.

After starting his career in 1956 in a 48-215 Holden, he drove production cars and Group C tourers in the pioneering years of the Bathurst endurance race as well as spells with the Works Ford, Chrysler and Holden outfits.

The older brother of the late Ian ‘Pete’ Geoghegan (who once held a record-equalling five Australian Touring Car Championships), Geoghegan won a string of titles during his career.

While capturing the Australian GT Championship in 1960, Geoghegan enjoyed considerable success in open-wheel where he was the Australian Drivers Champion in 1970 and the national Formula 2 champ in 1973 and 1974.

In 1963 he was the Australian Formula Junior champion and claimed second in the Gallaher 500 at Bathurst in 1967 alongside brother Ian.

He was to have attended a 50th anniversary meeting at Wakefield Park last month which was to signify the first year of Formula Vee (originally powered by Volkswagen 1200cc engines) in Australia before his illness took hold.

His major international success came in 1969 when driving a Lotus 39-Repco V8 once campaigned by Jim Clark, he won the inaugural JAF Grand Prix at Fuji.

The son of New South Wales car dealer and racer Tom Geoghegan, Leo was a formidable competitor in the popular Tasman Series.

He is survived by his widow Del, sister Marie-Lousie, two sons, Steven and Shaun and two daughters, Roslyn and Naomi.