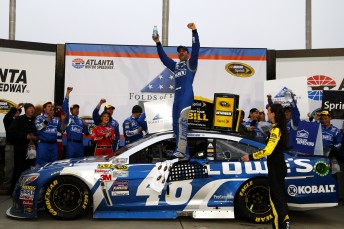 Jimmie Johnson has scored his first win of the NASCAR season, taking the second race of the season at a cold Atlanta.

After the race start was delayed due to rain, the race itself was run through under heavy skies and single digit temperatures.

Johnson’s win was his 71st of his NASCAR Sprint Cup Series career and fourth on the 1.54-mile Georgia track.

Logano held on to carry the unofficial Sprint Cup points lead by one point over both Johnson and Harvick, who forged a two-way tie for second.

Many stars were forced to start near the back of the pack after difficulties clearing technical inspection before Qualifying. As a result, former Sprint Cup champions Jeff Gordon, Johnson, Kenseth and Tony Stewart all failed to make a qualifying attempt and started worse than 30th on the 43-car grid.

Gordon was among those involved in the race’s first multicar wreck, in the 256th of 325 laps. Denny Hamlin triggered the melee when his Joe Gibbs Racing No. 11 Toyota lost traction exiting Turn 2, collecting Jamie McMurray and Ryan Newman.

It was that final crash which set-up Johnson’s charge for the lead off the re-start with 14 laps to run. Once he got into clean air he was never challenged through to the chequered flag.

“It’s a great racecar, and unfortunately the way qualifying went we didn’t have a very good pit stall pick and it took us a long time to get in front,” Johnson said.
“But once we did that we were able to utilise our awesome pit crew, get the stops done, race for the win and get the job done.”

The Sprint Cup Series heads to Las Vegas for the next race this weekend.