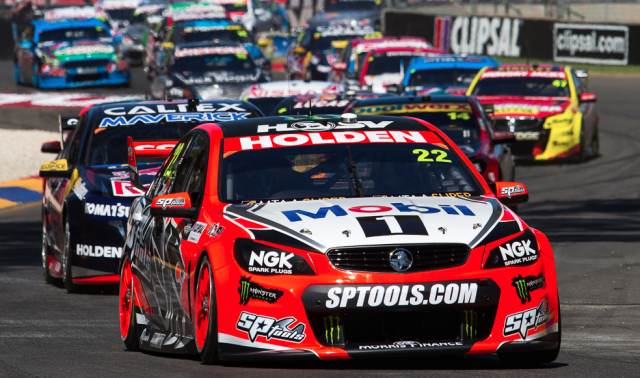 James Courtney believes that Red Bull Racing Australia remains the team to beat in the V8 Supercars Championship, despite his impressive win in the Clipsal 500.

The result was made all the more emphatic by a third place finish for Courtney’s HRT team-mate Garth Tander, who shadowed the leading duo home in third.

Courtney had been bullish on the HRT’s chances leading up to the weekend, boldly declaring that the team’s rebuilding phase is complete.

Although delivering in emphatic fashion on Sunday, the 2010 champion isn’t underestimating the might of Red Bull and Jamie Whincup.

“I think we’ve still got some areas to clean up,” said Courtney.

“They (Red Bull) probably dropped the ball and we were playing with our A-game.

“It was good at the start of the race to drive away from him on legitimate car speed.

“We had the same strategy as Jamie coming out of the pits and we were able to pass those guys and pull away from him. That was a really good feeling to see that car going backwards in the mirror.

“But as for consistency I think when we roll into Tassie (the second round of the season at Symmons Plains) they (Red Bull) are still going to be the ones to look at and chase.

“Definitely we’re pushing as hard as we can, working to be that team.

“But I think at the moment Triple Eight are still the benchmark guys that we’re all chasing.”

Courtney pointed to an off-season restructure of mechanics and the strength of his now five-year partnership with Tander as keys to this year’s campaign.

“I think last year towards the end both Garth and myself had really strong speed, just the reliability wasn’t there,” said Courtney.

“This year we had a big shake-up with mechanics and a lot of things have been put in place to clean up that side of things.

“We’ve also got a little bit more car speed which you can see from this weekend.

“Garth and myself are here to win the championship, we don’t care who it is in front of us. We’re both massively hungry and we just want to win.

“We’re working really well together; as much as it kills everyone. They thought we were going to tear each other apart and we couldn’t get on, but it’s been great.

“The speed in the car is down to us two working together and parking our egos in the team. It’s really good.”