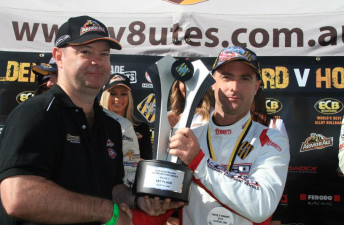 The race produced another titanic scrap between Walton and Harris with the former claiming the win under the Safety Car following an incident between Bruce Oaklands and Geoff Fane.

Walton grabbed the lead on the run down to Turn 1 with Harris in hot pursuit.

There was plenty of action behind as Craig Dontas dropped down the order after contact with the busy chasing pack.

The South Australian’s race came to an end when he hit the wall at Turn 8.

At the front the top two soon broke away from the pack behind who continued to squabble, resulting in Jordan Skinner being turned around.

Harris managed to find a way through but a mistake from the Gold Coast driver allowed Walton to retake the lead where he stayed until the race came to a close two laps short of the scheduled distance.

The race ended prematurely when Fane appeared to drive Oaklands into the pit wall at high speed.

George Miedecke claimed the final place on the podium in third ahead of Rhys McNally and Nathan Pretty.