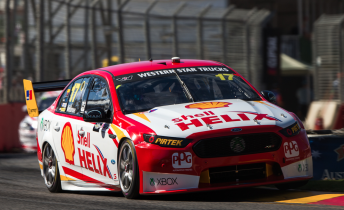 Shane van Gisbergen proved fastest in qualifying ahead of today’s Top 10 Shootout, but it was a ninth place result for Marcos Ambrose that stole the show.

Having qualified just 24th for the two Saturday races, the former two-time champion showed the first signs of competitive form by clocking the ninth quickest lap ahead of the Shootout.

Ambrose’s time came amid a flurry of fast laps in the dying seconds, which culminated in Van Gisbergen’s new qualifying record of 1:20.008s.

“I forgot there was even a Top 10 Shootout this morning, I was just trying not to be last,” said Ambrose after being congratulated by team owner Roger Penske upon returning to pitlane.

“I had a decent sleep and a good think about it over night and they came back with a stronger car for me.

“I’m just learning the ropes. It’s really hard for me when we’re in competition to really try and learn. I’m fully exposed.

“But yesterday’s races were good for me to get a feel for the car and we were able to make some pretty big changes overnight and get it more comfortable.”

Van Gisbergen had been just 11th and fifth in the two Friday qualifying sessions and was also pleased with his team’s progress.

“We had a much better qualifying car than Friday so I’m pretty stoked and it’s awesome to see Ambrose in the 10 as well,” he said.

“We’ll have to get the tyres working in the Shootout because we’re not doing our times on lap one, it’s on lap two. But the Shootout will be exciting. It’s always good here.”

Tander had moved to the top of the order with just one of the 20 minutes remaining before almost being bumped from the top 10 entirely.

Mark Winterbottom and Craig Lowndes both missed the cut in 11th and 14th respectively having joined Whincup in undertaking just one green tyre run.

The Top 10 Shootout will get underway at 1210 local time.