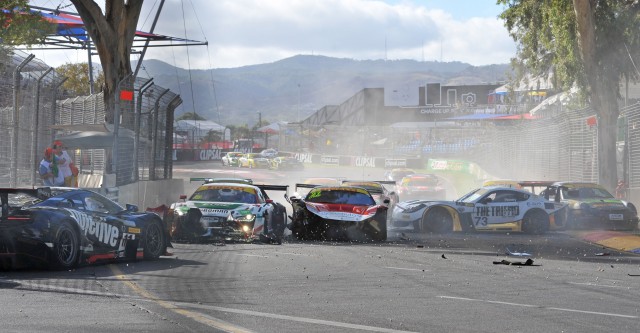 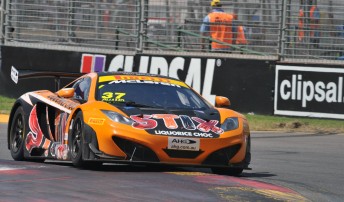 The Scotsman took the chequered flag from Theo Koundouris with Saturday double winner Nathan Antunes in third, but it was a first lap pile up which grabbed the headlines.

Polesitter Nathan Antunes made a clean start but the same couldn’t be said for Trass Family Motorsport’s Paul Kelly who lost control of his Ferrari 458 in a big way at the Senna Chicane.

His collision with the wall fired the car back into the path of the pack causing a series of crashes.

Racing eventually resumed with just 12 minutes remaining with several of the Trophy and Challenge class cars at the head of the field courtesy of their shorter pit stops.

Richard Gartner initially held the lead on the restart before Koundouris slipped through.

However, the man on the move was Quinn as he quickly caught the Porsche before moving into the lead of the race.

Antunes provided the most impressive performance as he scythed his way from 13th position at the restart to come home in third to secure the round win.

The Audi driver dropped down the order due to the longer compulsory pit stops issued to professional drivers.

Tony and Klark Quinn ended the weekend second for the round with the Trass Family Motorsport Ferrari of Jono Lester and Kelly in third.

The Australian GT Championship will head to Phillip Island for the second round on May 22-23.