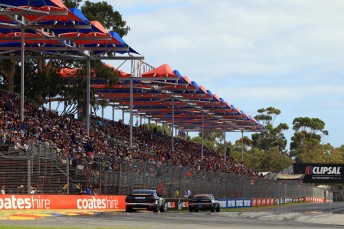 Andrew Miedecke secured his second win of the weekend in the final Touring Car Masters race at the Clipsal 500.

The New South Welshman in the Chevrolet Camaro was hardly troubled in the 11 lap contest despite the race being interrupted by a late Safety Car.

Miedecke led from the outset with Ford Mustang driver Gavin Bullas close behind.

There was plenty of action in the pack as a charging John Bowe and Glenn Seton scythed their way through the field having started from the back of the grid after retirements in Saturday’s race.

Within a couple of laps both Bowe and Seton had progressed inside the top 10.

Two laps were added to the race total when Corey McMahon brought out the Safety Car when he glanced the wall at Turn 11, which dislodged a wheel from his Holden Torana.

Once racing resumed, Miedecke successfully held off Bullas in a one lap showdown to take the chequred flag.

Eddie Albenica claimed the final place on the podium after successfully battling through a train of cars, including Cameron Tilley, Greg Crick, Keith Kassulke and Bowe.

After claiming two victories, Miedecke leads the championship by 14 points from Bullas.

The Touring Car Masters series heads to Symmons Plains for Round 2 on March 27-29.