McLaughlin: It was the hardest race of my life

McLaughlin: It was the hardest race of my life 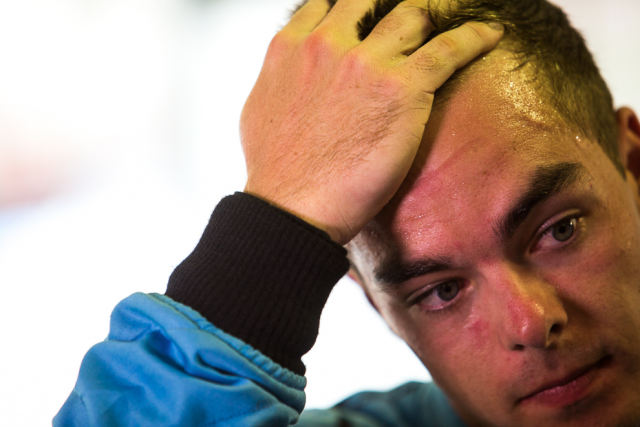 An exhausted Scott McLaughlin had to be dragged from his Volvo at the end of the Clipsal 500 after electrical problems and a troublesome drink straw made for a hellish race.

An alternator failure saw the 21-year-old instructed to run a ‘power save’ mode from the second lap, turning off his cool suit, which compounded a separate issue with the driver’s drink bottle.

A lack of charge from the alternator saw McLaughlin forced to pit from third place for a battery change on lap 38 of 78, dropping him off the lead lap.

The #33 Volvo eventually required a second battery change, with its driver on the brink of passing out as he took the flag four laps down in 18th.

“Physically it was the hardest race of my life,” McLaughlin told Speedcafe.com.

“I had no drink from about lap one until the first Safety Car and from lap two I was told to put it on power save, which turns the cool suit off and runs on minimal power.

“When I got to the Safety Car (lap 24) I was able to put my drink back in and drink as much as I could. I probably had two litres in three laps.

“I was feeling ok but when we came in for the stop and changed the battery we fell out of the leading pack so I lost a lot of adrenalin. That’s when I really started feeling fatigued.

“My cool suit still wasn’t that good and the boys reckon it froze up. I had no cool suit, just a helmet fan and no drink because the drink popped out again after the boys had played with it.

“That was basically it until the last pitstop when they changed the battery again with about six laps to go. I got to have another big drink then but I was just done.

“I was seeing bumps in the straight that I’d never seen before and my ears were ringing. It was so weird. I’d never felt anything like that before.

“There was just enough adrenalin there to get to the end. Once that wore off I was really lethargic and didn’t know what was going on.”

McLaughlin’s determination to finish yielded 51 points, which he says could be crucial come the end of the season.

“You do (think about stopping), but at the end of the day you’ve got to push on,” he said.

“I was pretty proud that I was able to pull through it. I said to my trainer that I wouldn’t have finished without all of the hard work.

“Being a little bit of a heavier driver helps me a lot too because I can lose a lot more fluid than some others.”

Today’s issues compounded a difficult Saturday for McLaughlin, who failed to start Race 1 due to an engine failure before receiving two penalties after jumping the lights in Race 2.

Sitting 18th in the standings after Adelaide, McLaughlin says there’s no point dwelling on the disappointment.

“We’ve just got to get on with it, there’s nothing we can do,” he said.

“Other people will have bad results too, we’ve just got to make sure we get on the ball in the next few races and get back in the fight. Nothing will keep us down.”