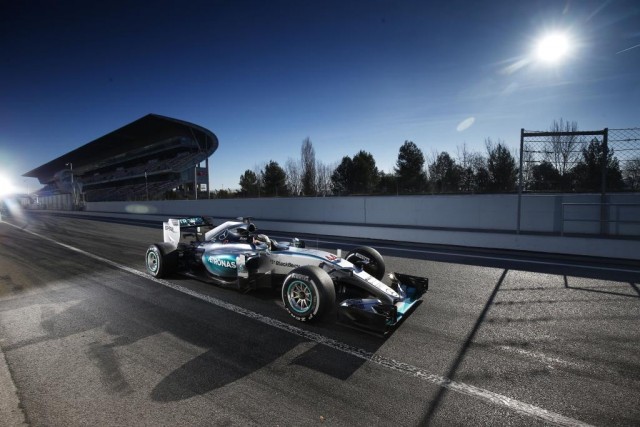 Lewis Hamilton showcased Mercedes impressive pace as he topped the times in the third day of the final Formula 1 pre-season test at Barcelona.

The world champion clocked a session best of 1:23.022s at the Catalunya circuit which was a quarter of a second quicker than the Williams of Felipe Massa and Ferrari’s Kimi Raikkonen.

Mercedes emphasised their pace advantage with Hamilton’s time arriving on soft compound rubber, while Massa’s and Raikkonen’s times were set on super-soft tyres.

Meanwhile, it proved to be another difficult day for McLaren with Kevin Magnussen suffering an oil leak with just 39 laps on the board.

The Dane, who deputised for Fernando Alonso, was 2.2s adrift of the pace set by Mercedes.

The Australian completed 128 laps throughout the day with his best time 2.7s slower than Hamilton.

“There’s definitely plenty of positives to take from today: we did a lot of laps and worked through the program,” said Ricciardo.

“Most of the other teams did some performance running today but we were focusing on ourselves and didn’t get onto the soft or super-soft tyres and the low-fuel stuff.

“Our long runs look pretty good and completing nearly 130 laps means reliability is where it should be too.”