James Courtney scored pole for Race 3 of the season

James Courtney has scored the Armor All Pole Award for Race 3 at the Clipsal 500 in a Top 10 Shootout that saw the top six cars covered by less than a tenth of a second.

The Holden Racing Team driver was the eighth on track, knocking Fabian Coulthard from the top spot with a 1:20.54s. 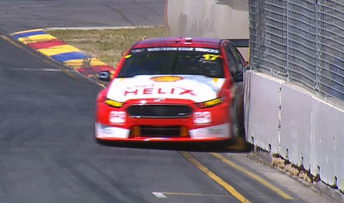 Ambrose tagged the wall on his slow down lap. pic: V8TV

Jamie Whincup and Scott McLaughlin will share the second row after briefly commanding the top of the time sheets following their laps.

Seventh through 10th on the grid will be filled by Tim Slade, Marcos Ambrose, Garth Tander and Jason Bright.

Ambrose’s effort included surviving a wild moment in the Senna Chicane, only to scrape the Turn 4 exit wall while on his cool down lap.

“I wasn’t paying any attention to what I was doing, I was in the wrong gear and just got caught out in the marbles left by the Touring Car Masters,” explained Ambrose afterward.

The 250km Race 3 of the V8 Supercars Championship will get underway at 1525 local time.

UPDATE: Tander has been moved up to seventh in the order after a timing issue was corrected.