Courtney holds on for Clipsal 500 victory

Courtney holds on for Clipsal 500 victory 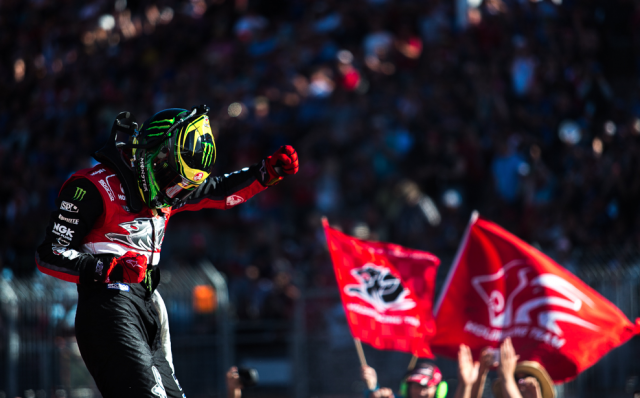 A complex strategic battle distilled into a three-way fight between Courtney, Van Gisbergen and Garth Tander in the closing stages.

The Kiwi lunged his rival into Turn 9 on several occasions but could not find a clean way through.

“That was epic,” beamed Courtney after taking the flag 0.8s ahead.

“Shane had a younger set of tyres at the end and it took everything to keep him behind. Thank god I held him off.”

Mostert had been attempting to take the position around the outside when contact tipped the Ford into a spin.

The Falcon collected the outside wall before bouncing back into the path of a hapless James Moffat, eliminating both cars.

The strategies had been scrambled by Safety Cars on laps 24 and 33 of 78, triggered by electrical problems for Ash Walsh and a Turn 8 crash for Lee Holdsworth respectively.

The first yellow came after all but Chaz Mostert had completed the first of their two scheduled pitstops to take on the required 140 litres of fuel.

Tander and Winterbottom were among those to stop for a second time under the first yellow, locking them into three-stop strategies.

The second Safety Car saw another group, led by Courtney and Whincup, to pit and commit to three stops, while Van Gisbergen and Coulthard headed those to stay on the conventional two-stop strategy.

The true picture began to emerge when Van Gisbergen pitted with just over 30 laps remaining; the Tekno Holden rejoining behind effective leaders Courtney, Winterbottom and Tander.

The Kiwi made short work of Winterbottom and Tander but, aside from a bump-and-run at Turn 9 that he soon readdressed, could not take the lead from Courtney during the long green flag run to the end.

Early front-runner Scott McLaughlin again endured a difficult day in the Volvo, dropping off the lead lap while the team replaced a battery drained of its power due to an alternator problem.

The 21-year-old eventually finished 18th, ahead only of Will Davison, Nick Percat and Andre Heimgartner, who also lost laps with a range of mechanical issues.

Courtney now leads the standings by 17 points over Coulthard after the opening three races of the season.