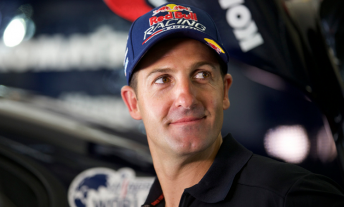 Whincup had looked strong following his Race 1 victory before a left-rear blowout saw him narrowly keep the Commodore off the concrete at the Turn 8 bend.

Risking castigation by team owner Roland Dane, Whincup threw caution to the wind by remaining on track even though he knew he was fighting a slow puncture.

“I would have been doing 250km/h I reckon when she went boom,” Whincup told Speedcafe.com

“I’m thinking we are going into the fence and somehow I washed off enough speed by sliding it just to get it around.

“As it turned turned out we got out of jail. We should have had an all-nighter on our hands fixing this car up.

“Roland (Dane, team principal), just said ‘mate, what are you going to do next time?’.

Whincup though was pleased with his day’s work as he chases a seventh title.

“I think we were in the box seat there,” he said.

“We made some gains and we had a good car. I feel like the effort we put in today was good.

“I was in the best position but was just unlucky. We picked up some debris after the Caruso hit and popped a tyre.”

The Red Bull driver had scored a 90th career win in Race 1, drawing him equal second on the all-time winners list with Mark Skaife.