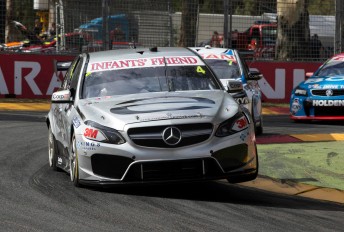 Ash Walsh drove to an eighth place finish in Race 2

A top 10 finish in his first weekend as a full-time V8 Supercars driver has well and truly exceeded Ash Walsh’s Clipsal 500 expectations.

Erebus Motorsport’s new recruit managed to survive an incident packed Race 2 to finish eighth in only his second start for the Queensland based team.

The result came after Walsh was lucky to escape contact with Dale Wood during the contest which turned around the Brad Jones Racing Holden.

The team confirmed on Saturday evening that Walsh has been penalised 25 points for the incident, which took place at Turn 4.

The Dunlop Series graduate indicated before the season began that his goal was to secure a top 10 finish by the end of the season.

Walsh cut a surprised but overjoyed figure after achieving his goal so early in the campaign.

“I’m absolutely over the moon to get a top 10,” Walsh told Speedcafe.com.

“I wanted to get a top 10 during the season but I never expected to get one in the first weekend. I wanted it to happen but I didn’t really think it was possible.

“To do it in the first weekend is bloody awesome.

“It was a pretty hard race and there was lot going on.

“There were a few times there when I was close to a few big accidents. I nearly collected Rick Kelly through Turn 5 massively. They were very scary moments so I was just happy to get through it for the team.

“Throughout the race the intensity is at a new level so I’m still adjusting to that.”

With limited experience in Car of the Future machinery, Walsh says he has plenty of room for improvement to continue his upward trajectory.

“I feel comfortable but there is still a lot to learn,” added Walsh.

“I’m learning about the Car of the Future and Wes McDougall (engineer) and I are working well together.

“We made changes for the first race and I didn’t like it so we made some more changes the other way and it really came alive.”

Walsh’s impressive run in Race 2 was the only highlight in a tough day for Erebus Motorsport.

Team-mate Will Davison failed to make the start of the second 125km race due to clutch failure on the warm-up lap.

The #9 Mercedes had suffered engine problems immediately after a heavy kerb strike in Race 1 and will receive a new motor overnight.

Davison’s disasters came after Morgan Haber suffered a high speed crash at Turn 8 behind the wheel of the team’s #63 Mercedes-Benz SLS GT3 in the opening Australian GT Championship race.