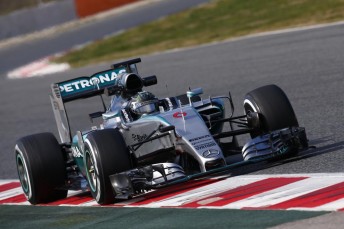 The World champion team completed 106 laps with Rosberg clocking a pre-season best of 1:22.792s, which was 1.203s quicker than nearest rival Valtteri Bottas in the Williams.

Rosberg’s blistering time arrived with his Mercedes fitted with soft compound tyres for the first time since testing began.

The effort was 0.7s quicker than the new testing benchmark set by Massa’s Williams yesterday.

Felipe Nasr was third fastest as he racked up the most mileage with 143 laps in the Sauber, which was more than a second quicker than Sebastian Vettel’s Ferrari.

McLaren enjoyed its most productive day of testing so far with Jenson Button completing 100 laps almost half of the team’s entire total in pre-season testing.

The 2009 world champion was able to log a long run in the MP4-30 before it came to halt on track with a suspected electrical issue.

“It’s never easy when you’ve missed out on so much testing, but we’re making good progress, and we got lots of really useful information today.

“We know we’re not the quickest guys out there, but you’ll certainly see a lot of improvement by the time we get to Australia.”