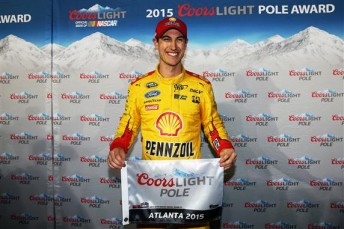 Logano adds the Atlanta pole to his Daytona win

Team Penske star Joey Logano has topped qualifying for the Fold of Honor QuikTrip 500 at the Atlanta Motor Speedway.

Jeff Gordon, Jimmie Johnson, Matt Kenseth and Tony Stewart were among those who failed to clear pre-qualifying inspections.

However Logano reigned supreme, posting his quickest time in the third and final round.

“Our first run today in practice, we were faster on our second run on scuffs, so I knew that the grip would stay in the tires for at least two runs,” Logano said, who claimed the ninth pole award of his career.

“It was probably right at the limit, though. Probably the next run after that, it would have taken a pretty big jump down.