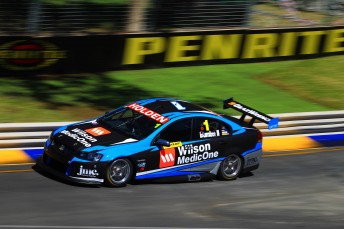 Paul Dumbrell scored the race and round victories

Paul Dumbrell has won the opening round of the Dunlop Series on the streets of Adelaide after coming out on top in a titanic Race 2 tussle with Cameron Waters.

Squaring off on the front-row, Dumbrell beat pole-sitter Waters to the first corner, before giving up the lead five laps in with a lock-up at Turn 14.

Dumbrell then retook the top spot for good three laps later, brushing the wall at Turn 8 as he built enough momentum to dive to the inside at the following hairpin.

Waters initially kept up the pressure before a series of left-front lock-ups saw the Ford driver fall away from the pace.

Both front-runners had to manage their use of the Senna Chicane kerbing during the race after quickly clocking up their three warnings for triggering the Turn 2 sensor.

A heavy crash for James Golding in the chicane brought out the Safety Car with five laps remaining, with the subsequent lengthy clean-up ensuring the race finished under yellows.

Dumbrell, who finished second to Waters in Friday’s opening heat, was awarded the round win courtesy of taking the higher place in the second race.

Aaren Russell and Andrew Jones took third and fourth respectively, having both made their way around eventual fifth place finisher Ant Pedersen.

Garry Jacobson, Jack Le Brocq, Todd Hazelwood, Taz Douglas and Shae Davies completed the top 10, with Douglas having charged through from 18th on the grid.

Bryce Fullwood joined Golding on the retirements list after mid-race contact with the Turn 8 wall damaged the front-end of the 16-year-old’s Holden.

Dan Day was also in the wars to end up last of the finishers with two spins; the first of which came courtesy of a tap from Paul Morris on the opening lap.

The Dunlop Series continues at Barbagallo on May 1-3.

Dunlop Series standings after Round 1