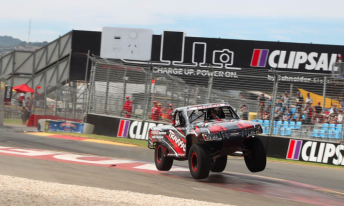 Sheldon Creed proved to be the star of Race 2

The American was forced to battle his way through the field after Charles Dorrance and local driver Nathan Pretty both enjoyed spells in the lead.

Creed made light work of Dorrance and Pretty before beginning to gap the field.

However, his healthy lead was short-lived as when a Safety Car was called in the closing stages.

With his lead dissipated, Creed was involved in a five way scrap for the lead with Robby Gordon, Matty Mingay, Nathan Pretty and Race 1 winner EJ Viso.

Desite being placed under immense pressure, Creed held firm to take the chequered flag with Robby Gordon unable to muscle his way past on a frantic final lap.

Mingay produced an impressive drive in the final laps to claim his second podium of the weekend in third, while Viso reached the finish in fourth after surviving two spins.

After leading the opening lap, Pretty came crossed the line in fifth.