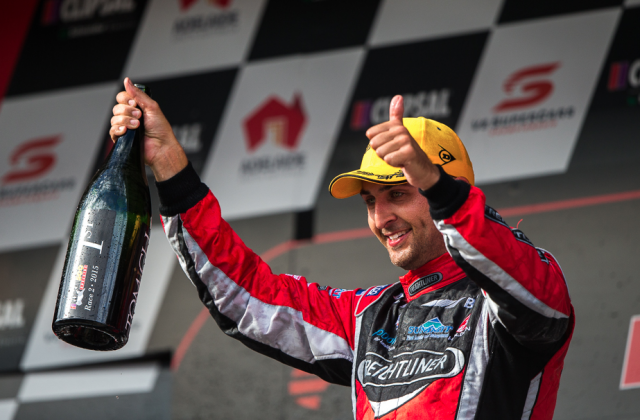 Fabian Coulthard scored a surprise victory in an action packed second race at the Clipsal 500 Adelaide.

Race 1 winner Jamie Whincup looked set for a double success before handing Coulthard the ascendancy by running wide at Turn 9 with 15 of the 39 laps to run.

Whincup had been battling a deflating left-rear tyre which eventually punctured heading into Turn 8, requiring a miraculous save from the six-time champion to keep the car off the wall.

James Courtney overtook Craig Lowndes and Whincup to emerge as Coulthard’s only threat in the closing stages, but could not make inroads on the Kiwi’s three second lead.

Scott McLaughlin finished third on the road but dropped to ninth in the final results thanks to a 10 second post-race penalty.

Starting second, the Volvo driver had taken the lead off the start, but was soon handed a 10 second addition to his pitstop for jumping the start.

That penalty was eventually served illegally under Safety Car, which earned the driver a second penalty.

McLaughlin had appeared fortunate, however, not to have received a mechanical black flag as his car – which received a rapid engine change between heats – burnt oil throughout the race.

The gradually slowing Whincup had created a frantic few laps as those behind scrambled for positions.

Moments after taking Lowndes for fourth, Shane van Gisbergen was turned around in the pack by Tim Slade, who had been diving to the inside of the Red Bull Holden into Turn 9.

Michael Caruso brought out the race’s single Safety Car on lap 19 when damage from an earlier hit on David Reynolds caused a puncture and subsequent crash at Turn 8.

Chaz Mostert clouted the Turn 8 wall in the early stages, while Will Davison failed to complete the warm-up lap due to a clutch failure.

The V8 Supercars will return to the circuit for Race 3 qualifying at 1055 on Sunday.