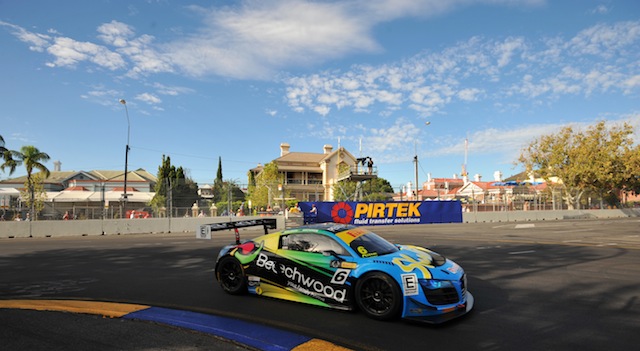 Nathan Antunes had to shoulder a pit lane penalty before winning the 60-minute encounter in the Australian GT Championship Presented by Pirelli at the Clipsal 500.

Driving the Swirk Audi, Antunes was pinched for his role in an incident that saw Ford GT driver Kevin Weeks eliminated near half race distance.

He rejoined in second before reclaiming the lead to beat the McLaren father and son of Tony and Klark Quinn by 5.76s before a 5s penalty was added to the Queenslanders for kerb hopping.

Their run was highlighted when Lester took a selfie pic of him and Kelly during their driver change while a crew member adjusted the drivers seat for Lester to climb aboard for the run home, a novel way to fill in time for a mandotary 57s category pro class penalty.

The only other Challenge finisher was the Lotus of Tony Alford and Mark O’Connor, though it spent time in the pits after contact with the wall. It was the 23rd and last classified finisher in the race, seven laps down on the Gartner Porsche.

The pair of 7.9-litre Camaros continued to have dramas with the Justin McMillan/Tomas Enge car failing to start and the Dale Paterson/Steve Richards entry only completing six laps.

Another non-starter was the Porsche of James Koundouris and Marcus Marshall.

After finishing second in Race 1 and thus earning a front row start for Race 2, their Porsche GT3-R didn’t make it past the dummy grid after it failed to select gears.

A loose wire in the fuse box under the dash was later found to be the offending item but by then it was too late for them to take their place in second position on the grid.

The final race of the weekend will be held tomorrow morning at 9.35am local time (10.05am AEDT).

It will be a 30-minute timed race with a compulsory pit stop and no driver change.

Cars with two drivers will be required to use the driver that started Race 2 today.