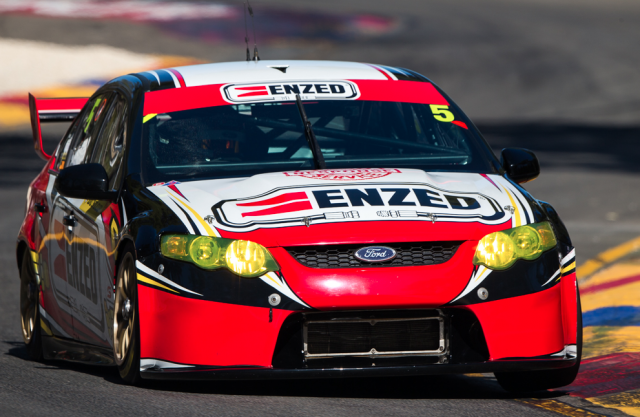 Cameron Waters took the opening race win of the season

Cameron Waters held off a charging Paul Dumbrell to convert pole into victory in Race 1 of the Dunlop Series on the streets of Adelaide.

The Prodrive Ford driver was not headed during the 16 laps, charging away from fellow front-row man Chris Pither off the start.

Lining up seventh after a five-place grid penalty for a yellow flag infringement in qualifying, Dumbrell cut his way through the pack during the early laps.

The reigning series winner took second from Pither on lap eight, by which point Waters was four seconds clear.

Dumbrell chipped a second from the margin over the next five circuits before a heavy crash from Brett Hobson brought out a lengthy Safety Car.

Hobson escaped injury in the crash which saw his Rsport Holden run almost head-on into the Turn 3 exit wall after breaking the car’s steering on the kerbs in the chicane.

Waters proved good enough to hold out his rival in a one-lap dash to the flag, with the race called four laps early due to time constraints.

Pither banked solid points in third ahead of Ant Pedersen, who made a clean pass on Eggleston team-mate Garry Jacobson to secure fourth.

Aaren Russell, Jack Le Brocq and Andrew Jones completed the top six, with Jones charging from the back of the field after all three BJR Holdens were excluded from qualifying for breaching brake rotor regulations.

Taz Douglas held third in the early stages before receiving a black flag for not having the THR Holden’s window net fitted. He returned to finish 18th.

Josh Kean and Matt Hansen both failed to finish after tangling at Turn 9; a corner which later saw James Golding earn a drive-through for spinning the luckless Hobson.

Race 2 for the Dunlop Series will kick-off at 1140 tomorrow, with the grid set from the results of the opening heat.