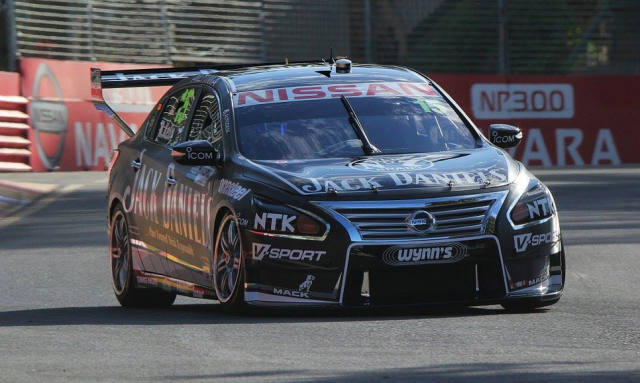 Rick Kelly and Nissan Motorsport have drawn first blood at the Clipsal 500 Adelaide, topping the opening V8 Supercars practice session of the season.

As usual, pre-marked tyre condition was the talk of the paddock, with Nissan engineering manager Scott Sinclair noting he was not surprised to see Kelly on top.

“The guys on #15 have gone aggressive with their tyre plan and are pushing pretty hard,” explained Sinclair.

“It’s not a surprise that they’re up there but it’s whether they can stay there that’s the question.”

Chaz Mostert was the fastest of the new FG X Ford Falcons in third ahead of Jamie Whincup and Shane van Gisbergen.

Mark Winterbottom survived a late brush with the Turn 8 exit wall to end up sixth fastest.

The session ran green for its duration, with a mid-session spin for James Courtney among few notable incidents.

Courtney lost the rear of the #22 HRT Commodore on the bumps into Turn 4, which have been re-profiled this year due to resurfacing work on Wakefield Road.

Andre Heimgartner also had a minor off-track excursion during his first official V8 Supercars session, pulling his Super Black Ford up short of the Turn 11 tyre barrier after running onto the grass.

The second of three 30 minute practice sessions will get underway at 1050 local time.