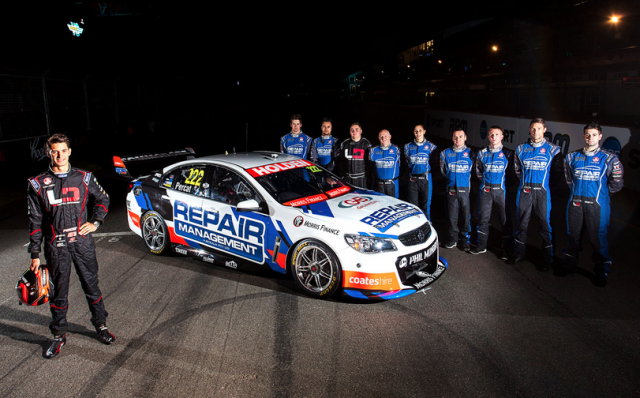 Percat is committed to building LDM into a top 10 team

The small team has unveiled the South Australian’s Holden in the pitlane this morning ahead of opening practice for the Clipsal 500 Adelaide.

A belief in LDM’s potential saw Percat decline an opportunity in the United Sportscar Championship and the comfort of a Pirtek Enduro Cup seat with the Holden Racing Team in order to take the drive.

The move ended Percat’s roller-coaster seven-year association with Walkinshaw, which had scaled the heights of a Bathurst win in 2011.

“I’ve been at the workshop nearly every single day since the start of January helping to get everything going in the right direction,” Percat told Speedcafe.com of his time at LDM to date.

“Lucas can see what he has to do to get the team going forwards and Barry has been unbelievably good since he came onboard.

“We’re coming from a pretty low base. We’ve rebuilt the cars and it’s really a whole new team.”

“My goal is to be in the top 10 in the championship,” he said, having finished an impressive 12th last year in the fourth Walkinshaw entry.

“Last year we were super close to being in the top 10 even though I started the year really poorly.

“As a driver I’m starting at a better level than I was and the car is just as good as what we had, so there’s no reason why I can’t be in that top 10 if we get all our stuff together.”

Percat has signed a two-year contract with LDM and will be the team’s longest ever serving driver if he completes both seasons.

He is adamant that he’s not simply using the season to leap-frog back into a bigger squad next year.

“I’m not here just for one year and to disappear; I want to help build this into a good team,” he said.

“You can’t get a team working hard for you if you’re only here for five minutes.

“If I have a good year and we end up in the top 10 there’d be no reason to go looking anywhere else.”

While both of LDM’s current chassis were originally built by Triple Eight, the team has been at arms length from the dominant squad in recent times.

Percat is hopeful that improved results will help reform a strong bond between the teams.

“At the moment there’s not a massive amount to it, but obviously we’d like a stronger connection,” he said.

“I spent a good week at East Sale doing the aero testing with Ludo (Lacroix, technical director) and Ty (Freele, mechanic) and got to know them really well and understand how they go about it.

“Just to be acknowledged by Roland now is great, but I think he’d like to see us do a solid job with what we’ve got before we go chasing all the bells and whistles from them.”