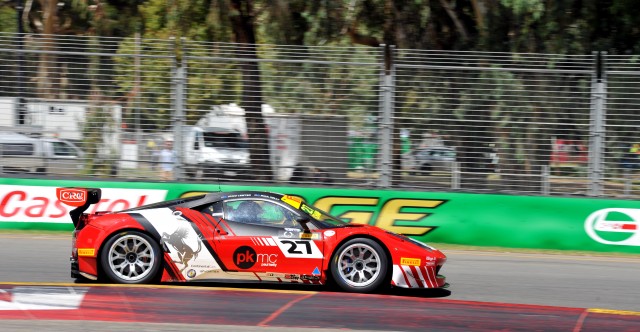 Trass Family Motorsport claimed the first pole position of the Australian GT Championship season despite a clash with Erebus Motorsport’s Morgan Haber on the Adelaide streets.

The Kiwi team’s Ferrari 458 Italia, driven by Jono Lester, posted a session best 1.21.4865s effort which arrived after a collision with Haber at the Turn 9 hairpin.

The clash ended the session prematurely with Haber sidelined due to steering damage.

Crash aside, it was an impressive performance from Australian GT newcomers Lester and TFM.

The Aston Martin of Dean Canto/Andrew Taplin will head the second row alongside Nathan Antunes in the Skwirk Audi R8, with the #75 Steve McLaughlan/Steven Johnson Jamec Pem Racing R8 in fifth.

Tony Quinn will pair up with son Klark Quinn in the Darrel Lea McLaren MP4-12C GT3, which will start from sixth, after the former’s new McLaren 650s was ruled out following a crash on Thursday.

Matt Kingsley led the Challenge Class and was 19th overall in the Porsche he shares with Brendan Cook.

Michael Hovey brought out the red flags earlier in the session when he lost control of his Ginetta G55.