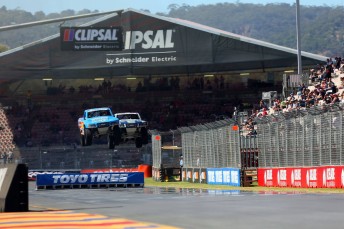 The Stadium Super Trucks on the streets of Adelaide

The South Australian Motor Sport Board will continue to pursue other drawcard international categories alongside its signature Clipsal 500 V8 Supercars weekend.

The board’s chief executive Mark Warren has underlined intentions to maintain its mantra of innovation, which this year has seen the American Stadium Super Trucks added to the event bill.

The Super Trucks proved the star of the show on Thursday, with their spectacular jumps and unique handling capturing plenty of attention.

An Asia Pacific Ferrari 458 Challenge round was also to be held as part of the meeting this year, before a scheduling clash saw it replaced with a Ferrari demonstration.

“It’s always been the intent to innovate the event every year,” Warren told Speedcafe.com.

“We had some feedback from fans a couple of years ago that they were getting a little bit bored about the same old, same old.

“They loved the racing but it prompted us to starting thinking about introducing other categories and having them as features.

“So having the opportunity to have the Toyo Tyres Stadium Super Trucks, it’s just something completely different. It’s sheer entertainment.”

Top level international classes are highly unlikely to share top billing with V8 Supercars under the current Clipsal 500 contract, which runs until 2021.

The SAMSB is however also entertaining the prospect of holding a separate race meeting, should the right international class be found.

The board has already held initial discussions with Formula E, while the burgeoning World Endurance Championship is also being touted as a possibility.

While Warren says he has not held discussions with the FIA over bringing the WEC to Australia, it’s an option that isn’t being ruled out.

“You look at motorsport; it is continually changing,” he said.

“There are a lot of different formats that are now vying to become the next big thing.

“I think that having some sports car type categories might be an interesting avenue to pursue. There are plenty of options.”

If a high profile international category makes it to Adelaide, Warren says the natural fit would be either side of the V8 weekend.

“Being a temporary street circuit I think we would have to look very carefully at the timing of that,” he said.

“Over this period of time there is a lot more happening in terms of events compared to when he had the Le Mans event in 2000. There is the Fringe Festival, The Adelaide Festival.

“To extend the event to run either side of Clipsal would be the natural way in which you would do another event.

“The alternative would be to build the track again at another time of year which did happen with Le Mans in building it early. We would have to have a look at the costs and the benefits of doing so.

“The time to do that is also fitting in with the world calendar and where that might work to get the European teams.”

The SAMSB meanwhile continues to monitor Formula E, which is currently partway through its first season.

“There were some early discussions and we got to the point where we really want to see the success of the first season, to see what the fan response is to it,” he said of Formula E.

“It also needs to fit. That’s where the Weatherill government will look at it in terms of really promoting Adelaide the way we want it to be promoted.

“That’s what I think the attraction of Formula E is for any city. It really is going to be all about promoting the city itself.

“It would be great to get a local fan base. I think for this event, we get such strong support, we’d want to hear from them if they think that a Formula E event would be a good thing here.”