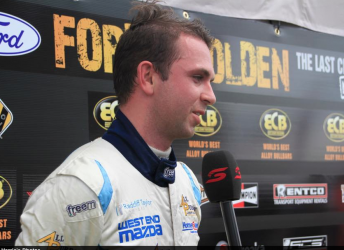 Ryal Harris kicked off his V8 Ute Racing Series in the best possible way with victory in the Clipsal 500 opener.

The Ford driver wasted little time from his seventh place grid slot as he emerged into the top three in the early stages of the 8 lap contest.

Harris continued his charge by slipping past the lead two of Kris Walton and polesitter Rhys McNally mid-way through the race.

Once in front Harris controlled the race taking the chequered flag from Walton and Erebus Motorsport’s Adam Marjoram.

McNally’s podium hopes were dealt a severe blow when a bent steering arm incurred from contact at Turn 1 saw him drop to 18th position at the finish.

“It was disappointing with the qualifying format but I knew we had the pace to do it I just had to bide my time,” said Harris.

“It’s so hard to pass Kris (Walton) he can be so aggressive and you have to be just as aggressive to pass him so it’s going to be hard keeping the friendship intact this year but I really want that third championship and I’ll do anything to get it.”

Craig Dontas came home in fourth ahead of Queenslander Ryan Hansford and George Miedecke in sixth.

The race will set the grid for Race 2 which will take place at 10:45am on Saturday.