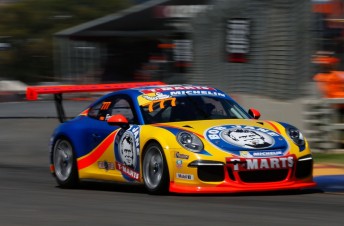 Nick Foster scored the first pole of the season

Nick Foster has grabbed the first Carrera Cup pole position of the year with the fastest time ahead of the opening race on the streets of Adelaide.

Foster, who was fastest in yesterday’s practice, set the benchmark time midway through the session before a red flag ended the proceedings with around six minutes to run after James Bergmuller made heavy contact with the concrete barriers exiting Turn 8.

Already sporting a lower leg injury when he ruptured his Achilles tendon in a water skiing accident, Bergmuller limped from the car, but reported that he sustained no injuries in this morning’s accident. His car will not run this weekend and the crew will make assessment on the damage ahead of the next round at the Grand Prix in two weeks.

For Foster the pole award starts the season on the right note after taking overall victory at the final round of 2014 on the streets of the Gold Coast. 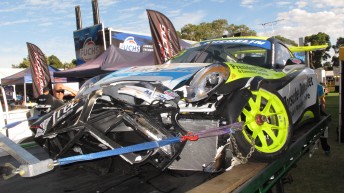 James Bergmuller’s car is out of the weekend

Tony Bates was the fastest amongst the Tag Heuer Carrera Challenge, formally the Elite Division. Roger Lago was second amongst the semi-pro drivers followed by defending champion Stephen Grove and Shane Smollen.

The opening race of the Carrera Cup gets underway at 2.55pm local time.