Nissan Motorsport owner/driver and keen pilot Todd Kelly will compete with backing from aircraft manufacturer Pilatus at the Clipsal 500.

The deal is a one-off for the Adelaide event while the squad sorts a sponsorship package for the remainder of the season.

Kelly and brother Rick are both keen aviators, travelling to many V8 Supercars races in the former’s Pilatus PC-12.

“It’s great to have Pilatus on board for the Clipsal 500 weekend,” said Todd Kelly.

“The first taste of a Pilatus for myself was about 10 years ago when I had a flight in a RAAF Pilatus PC-9 Roulette over Phillip Island.

“I’ve been working with the guys there for a few months now to get endorsed on the Pilatus PC-12 – which is one of the most versatile aircraft available today.

“It’s fantastic that Nissan Motorsport is involved with Pilatus – one of the most well respected and innovative brands in aviation.” The squad announced earlier this month that Michael Caruso’s entry will run the factory colours for the season, while external sponsorship is being sought for Moffat.

Nick Percat’s Lucas Dumbrell Motorsport Holden is now the final V8 Supercar yet to be unveiled ahead of opening Clipsal 500 practice on Friday.

The #222 Holden, which will sport primary backing from the team’s 2014 season sponsor Repair Management Australia, remains covered in the LDM garage while the team prepares it for the weekend. 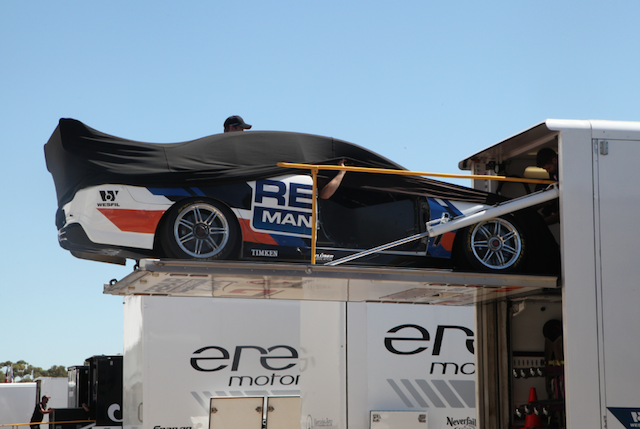 Percat’s Holden being unloaded on Wednesday