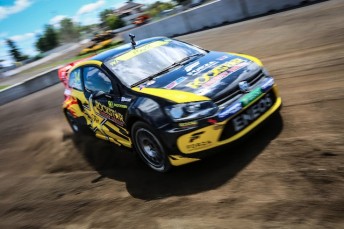 America’s Top Gear presenter Tanner Foust has confirmed he will compete in at least four rounds of the 2015 FIA World Rallycross Championship.

Foust, a winner of the Finland round of the championship last year, will campaign a Marklund Motorsport Volkswagen Polo RX Supercar.

He will start the limited campaign in the British round at Lydden Hill in Kent at the end of May where he was won in 2012 and 2013.

“I’m looking forward to being able to return to the FIA World Rallycross Championship for a select season of events this year,” said Foust.

“The tracks in the series are incredible and I’m especially looking forward to the Lydden Hill event – there is something special about racing at the home of rallycross.”

The two-time Formula Drift champion has confirmed he will also contest World RX of Canada (7-8 August), World RX of France (4-6 September) and the newest addition to the RX calendar, World RX of Barcelona which will be held at the famous F1 venue, Circuit de Barcelona-Catalunya from September 19-20.