The first CAMS Australian Formula 4 car has completed its maiden shakedown at Winton.

Reigning Formula Renault 1.6 NEC champion Anton De Pasquale jumped behind the wheel of the Mygale chassis which arrived from France earlier this month.

De Pasquale gave the car its initial shakedown before a two hour run where the Australian worked on bedding in its various components alongside some minor chassis tuning.

The car completed 52 laps of the 3km Victorian circuit without issue.

“The car ran without problems throughout the day so credit has to go to G Force and Mygale for assembling the car correctly,” CAMS motorsport development manager Cameron McConville told Speedcafe.com. 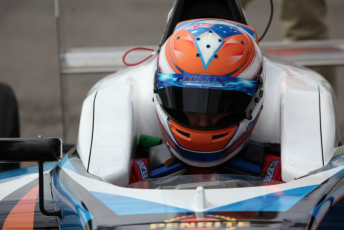 “We only ran one set of tyres and happily the Hankook tyres ran 52 laps with very minimal tyre degradation which is a great sign as it was around 28 degrees at the track.

“It was great to have someone of Anton’s experience behind the wheel so he was able to get on it straight away and get his feedback.

“It was a great chance for us to learn about the car and nothing came loose or fell off so box ticked for day one.”

The championship’s registered teams BRM, DREAM Motorsport and AGI Sport will receive an opportunity to test their drivers in the car at the circuit tomorrow (Wednesday).

Each team will be given a two hour slot to distribute among its drivers.

Meanwhile, the category, which will kick off at Townsville on July 10-12, has confirmed its fifth driver with Luis Leeds joining DREAM Motorsport alongside Thomas Randle.

The 14-year-old from Melbourne will dovetail his F4 campaign alongside a tilt in the Australian Formula Ford Series.

Leeds, a member of CAMS Academy Driver Development program, finished seventh in the Formula Asia Cup Series last season and will be among the drivers testing the F4 car at Winton on Wednesday.

“I’m very excited to be teaming up with DREAM Motorsport for the 2015 Formula Ford and Formula 4 seasons,” said Leeds.

“I’m really looking forward to working with the team and can’t wait for the season ahead. To be teaming up with Thomas Randle in Formula 4 will also be a valuable experience.

“Thomas is a very highly rated driver and it will be a great learning opportunity to be racing alongside him.

“The team are very impressive and I will be spending a fair chunk of time in their state-of-the-art simulator so I can be well prepared for the season ahead.”

The remaining 19 Mygale Australian Formula 4 cars are due to arrive in March with teams expected to take delivery in April.